Architects should include wild areas in their projects, plant trees in the ground rather than in pots and discourage urban beekeeping to encourage biodiversity, according to one of the world's leading bee experts.

'They get starved out," Carnell said. "There's not enough food. What's been happening in cities is people have been bringing in beehives and it has starved out the native bees."

"The biggest risk to bees is actually beekeepers"

The UK has 270 species of bees but only one type of honeybee, according to Carnell. Other insects including wasps and flies also help pollinate plants.

"The most effective pollinators are the solitary bees and the bumblebees," said Carnell, a beekeeping expert and author who lectures and runs courses on bees.

But these species have a shorter flying range than honeybees, which are domesticated livestock that live in colonies of around 50,000 insects and outcompete wild bees for food.

"It's very dangerous," added Carnell, who is head beekeeper at The Newt estate in Somerset, England and who helped commission architect Invisible Studio to build the Beezantium, a bee discovery centre on the estate.

"The biggest risk to bees is actually beekeepers," she said. "Honeybees are being bred for the benefit of humans for honey production. There are a lot of aspects of beekeeping that are not sustainable and not natural."

Beekeeping "posing a threat to both wild bees and honeybees"

Carnell's comments follow a recent report by the Swiss Federal Institute for Forest, Snow and Landscape Research, which found that hive densities in Swiss cities were now "unsustainable," with unregulated beekeeping "posing a threat to both wild bees and honeybees".

To help pollinators and increase biodiversity in cities, Carnell urged architects to allow areas of wild planting to flourish on their sites instead of specifying manicured landscaping. 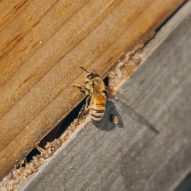 Trees should be planted in the ground, she said, so they can exchange vital nutrients with other trees via subterranean networks of mycorrhizal fungi.

"We're forgetting that the trees need to communicate [with other trees]," she said. "So it's no good having it in a tub. It's not sustainable. The plants are going to really struggle to survive."

Covering buildings with plants in pots, beds or green walls is a big trend in architecture, but environmentalists have started to question their contributions to biodiversity.

Designer Thomas Heatherwick came under fire last month for his 1,000 Trees project in Shanghai, which features hundreds of individual trees in elevated planters.

"The potential of nature is diminished in this quest for a self-indulgent architectural concept," Oldfield wrote.

Mature trees should not be cut down since they provide vast amounts of pollen, Carnell said. A colony of honeybees requires an acre of flowering plants for food, she said, pointing out that a single 200-year-old lime tree can provide the same amount of food.

"It's very difficult to have an acre of wildflowers in the centre of London so you're dependent on the trees, but some trees take years before they flower. You want 200-year-old trees, which will have an acre's worth of flowers, but we're cutting down those trees."

"What we need is wild areas"

Carnell suggested that architects could rescue mature trees that are threatened and replant them on their schemes rather than specifying saplings.

"If an ancient tree somewhere else in Britain is going to be felled because it's in the way, then maybe find a way of moving that," she advised.

"What we need is wild areas," she added. "It's not just a case of more planting, because bees need good nutrition. So it's no good bringing in exotic flowering plants if they're intensively grown as they would have used neonicotinoids [insecticides that are lethal to bees] in the soil and seeds, which then poisons all bees." 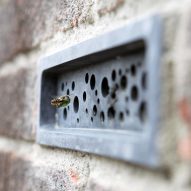 Wild areas are needed in cities not just to provide food for bees but to give them places to live and breed Carnell said. Some species live in the ground while others nest in the hollow stems of wild plants.

In an effort to help wild bees, designers have proposed a range of solutions including bee hotels, food sources and even synthetic flowers that produce artificial nectar.

"Really tricky" to tell is bee bricks are useful

Meanwhile, the town of Brighton in England has introduced a planning rule requiring all new buildings to include bee bricks that contain holes where solitary bees can breed.

Carnell said it is "brilliant" that people are trying to help bees but said it was "really tricky" to comment on whether bee bricks are helpful. "There isn't the research so it's difficult to say," she said.

Species such as the solitary red mason bee, which is a vital pollinator of apple trees, lay their eggs in nettle or thistle stalks. "But we've cleared them all away so they don't have those homes," Carnell said.

This bee may instead choose to nest in a bee brick but only if it meets its precise requirements. It needs a tube of a certain diameter with a length of 180 millimetres, Carnell said.

"The reason is that the female determines the sex of the egg starting from the entrance of the tube," she explained. "So she'll lay three female eggs at the back and then she'll lay three male eggs in front of them. And that's because the males hatch first. Then they're all ready to go when the females come out so they can mate.

"So the first issue is that you've got to make sure that whoever's making the bee bricks has got them the right measurements for whichever species of bee they're trying to attract.

"It might be better to plant nettles and thistles," she said.