Architecture firm Populous has unveiled the National Speed Skating Oval, also known as the Ice Ribbon, the only new building created for the Beijing 2022 Winter Olympics.

Boasting a facade formed of 22 giant, illuminated ribbons, the 12,000-seat arena is expected to become a focal point of the games, which start next week. Its 400-metre race track will be the venue for all speed skating events.

International firm Populous – whose previous buildings include the London Olympic Stadium and the Tottenham Hotspur Stadium – based its design on a children's game played in Beijing.

"The traditional ice game in old Beijing involved a high-speed spinning and leaping ice top that seemed to have infinite energy and possibilities," he said.

"That's what I thought of when reflecting on the characteristics of Olympic speed skating. So, the ice tops became part of the design inspiration injecting a strong Chinese memory into the venue."

This developed into a design involving 22 huge light strands, which flow around the oval-shaped stadium to create the impression of fast motion.

The shape of these ribbons is based on another of Chang's childhood memories. 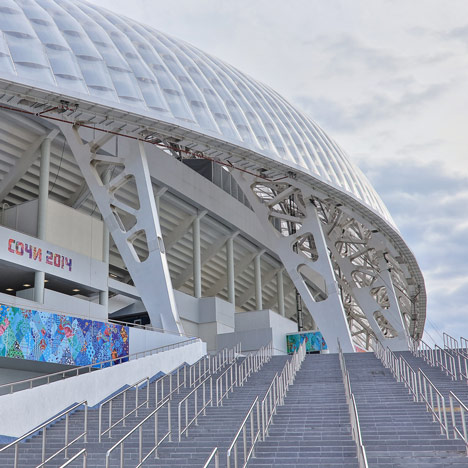 "The ribbons of the design make reference to the floating silk ribbons of the artwork my family had dedicated their time to – which was the study and preservation of the Dunhuang Grottoes, a significant collection of Buddhist art from the Tang dynasty," he said.

The ribbons create a 33.8-metre-high cocoon around the arena, designed to create a more immersive experience for spectators. They can be programmed with dynamic lighting, which will bring the facade to life at night.

With Beijing becoming the first city in history to host both a summer and winter Olympics, the Ice Ribbon has been built in the existing Beijing Olympic Park.

It sits alongside Herzog & de Meuron's National Stadium and the National Aquatics Centre by PTW Architects – better known as the Bird's Nest and the Watercube – which will both be back in use for this year's games.

State-of-the-art technology features in the Ice Ribbo, in order to optimise its performance and reduce its environmental impact.

It will be one of the first venues in the world to feature an ice surface created using carbon dioxide transcritical direct cooling, making it more energy-efficient than a traditional rink.

This system makes it possible to achieve a temperature difference of less 0.5 degrees Celsius across the surface, which results in a faster and stronger track.

Seating and acoustics have also been carefully designed, to ensure the movement and sound of the speed skating blades can be seen and heard from every seat.

Populous won a competition to design the National Speed Skating Oval (NSSO) in 2016.

The firm then developed the schematic design in just 12 weeks, to allow construction to begin on schedule. It involved collaboration between Populous staff from all around the world.

"The winning design for the Ice Ribbon was created in an intense time frame and was forged through several concepts and many iterations to develop a spinning concept into its final form," said senior principal Andrew James.

"It became a global effort with our team in Beijing, Brisbane, India, London and America drawing on our experience from Oval Lingotto in Turin, Italy, and our design of Fisht Stadium in Russia, home of the 2014 Winter Olympic Games," he added.

The Beijing 2022 Winter Olympics take place from 4 to 20 February.

Populous has designed numerous venues for the Olympics. As well as the Fisht Stadium for the 2014 Winter Olympic Games in Sochi, the studio created the  London 2012 Olympic stadium.It is currently designing the masterplan for the 2024 Olympics in Paris.