The long-awaited Tottenham Hotspur Stadium has opened in north London, featuring a retractable pitch that can host both Premier League football matches and American football.

Along with being the home to Tottenham Hotspur, the multipurpose stadium is the first outside the USA to be designed to host NFL games, with a fully retractable natural turf pitch that can be removed to reveal an artificial playing surface.

"It is a benchmark of how stadiums should be designed," Christopher Lee, managing director of Populous told Dezeen.

"This is a game changer. There is no doubt in my mind that the new Tottenham Hotspur Stadium is the best stadium in the world."

Tottenham Hotspur Stadium's most distinctive feature is the 17,500 capacity South Stand, which is the largest single-tier stand in the UK.

It is topped with a glass walkway, where visitors can walk out to touch the cockerel above the stand.

Populous designed the South Stand to help create a "wall of sound" within the stadium and help create a distinctive unique feel to the ground.

"We wanted to create a seating bowl that had identity, that had character, that wasn't just a symmetrical ubiquitous stadium that you didn't know where you are, didn't know which stand you were in," said Lee.

Below the South Stand is a five-storey-high glass atrium with two large tree-like columns that support the  structure. This area, called The Market, is a large food and drinks hall that contains a 65-metre bar – Europe's longest.

The space is intended to be used as a gathering place before and after the matches, as well as being opened up for events.

It is one of several features designed to maximise the functionality of the building, along with the media room, which will be used as a cafe on non-game days, and the micro-brewery operated by Beavertown Brewery.

"It seems insane to have built stadiums of this size that would only be used for one team every other week," said Lee.

"Here it was very much about creating genuinely a kind of civic building. To have the community come in and use the cafe or brewery or in the south stand, I think that's great."

Being able to remove the turf pitch, which is separated into three parts before being rolled under the south stand for storage, is key to this strategy.As well as being able to play American football, it means the space can easily and quickly be converted into a venue for concerts and events.

"We are designing an economic resilience into the building by cleverly creating spaces that have multiple uses," continued Lee.

According to Lee, the club's main aim for the stadium was for all fans to have a great match day experience, no matter how much they are paying.

"Cheapest tickets are still expensive and they are treated really badly – come in here, do this, drink some overpriced bad beer and then leave. Here the idea is that it is much more democratic – everyone has a great experience."

Key to this strategy was creating a full-day experience, with numerous different options for fans.

In the general admission areas, ticket holders can explore the full length of the concourse, which along with The Market and micro-brewery has three pub-style bars inspired by White Hart Lane. 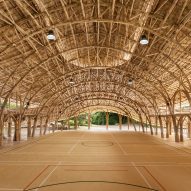 "We looked at a lot of stadiums around the world. One of the things we really liked about NFL stadiums, is the ability to move freely around the building," continued Lee.

"Football used to be much like the theatre, you are rushed in, went to the theatre and had a quick drink at half time. Now there is the idea that people go for a much longer time, its a day out rather than just a 90-minute game."

The stadium also has a huge variety of private and corporate suites and bars. These include The Tunnel Club, a restaurant and bar with a glass-wall that will allow guests to watch as players walk from the changing rooms to the pitch.

Two further exclusive spaces, names Sky Lounges, at the top of the East and West stands will give spectators panoramic views of the pitch.

Throughout the project Populous wanted to create a football stadium that was both modern and authentic.

"We were really interested in what makes an authentic football experience," said Lee.

"The club wanted to created higher quality, but how do you do that without losing the bits of football that we love? How do you create higher quality without becoming Selfridges food hall, which is really easy to tip into as a designer."

Alongside the stadium, the Tottenham Experience includes the club's museum, archives, shop and a cafe. The building, which has a facade made form CNC-cut cast iron, extends either side of the restored Grade II-listed Warmington House.

Now the stadium is complete, the second phase of the Tottenham Hotspur's development of the site is set to begin. This will include a 180-bedroom hotel, an extreme sports building with the UK's tallest climbing wall, a community health centre and 222 new affordable homes.

Populous is one of the world's most prolific stadium designers. Tottenham Hotspur Stadium is the third large stadium designed by Populous in the capital with Arsenal's Emirates stadium opening in 2006 and Wembley for the English national football team in 2007.

Having creating several of the stadiums that hosted games at the World Cup in 2018, the studio is now designing a spherical arena in London, and the masterplan for Paris 2024 Olympic Games.

Photography is by Hufton + Crow, unless stated.