Located one hour south of Mexico City, La Hacienda Jardín was designed for a family as a weekend retreat that will eventually be used as a retirement home.

Monterrey-based Práctica Arquitectura created the two-storey home as a reinterpretation of a classic Mexican hacienda – a large ranch or plantation.

Here, the studio chose to design the building to be more adaptable than typical haciendas, aiming to create spaces that could change as the way in which the home is used evolves.

Haciendas are usually surrounded by gardens, but this project turned the concept on its head by creating a building that looks like a hacienda but instead has the garden at its centre.

"The typical haciendas in Mexico and in most parts of Latin America and Spain are spaces with large gardens around them and restricted dark-cold inner areas, impossible to rearrange to the needs of their inhabitants," David Martinez, head of Práctica Arquitectura, told Dezeen.

"This project takes formal inspiration in the hacienda, reducing the elements to its minimal, being a roofed wall, creating different paths of circulation within," he added.

"It solves the issues intrinsic to the typology through light and the possbility of organizing each space without any restriction."

The 750-square-metre residence features a perimeter wall built from Texcal volcanic stone, the same stone as that of the nearby El Tepozteco mountain.

The house's structure is made from Durango pine, which was also used for interior beams and poles, while huanacaxtle wood was chosen for the latticework and finishes in the house. 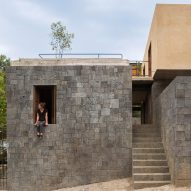 "The decision to work with local materials respond to the architectural dialogue the project establishes with the town of Tepoztlán, the mountain (El Tepozteco) and landscape, the climate and the vegetation," Martinez said.

La Hacienda Jardín's ground floor holds four bedrooms, as well as the kitchen and numerous areas that open up to the courtyard for combined indoor and outdoor socialising in the temperate climate.

Upstairs, the main bedroom overlooks the courtyard. The first floor also has living space next to the bedroom.

The courtyard features a sunken seating area and is planted with greenery suitable for the region.

"The architectural program questions the area's predominant practice of first fencing off a property and then inserting a building and landscaping the rest," Práctica Arquitectura said.

"This project does the opposite; it becomes a roofed wall open to the elements that contains a garden of endemic vegetation in its centre," the studio added.

Wooden lattices and pergolas were used to create an open feel and a "play of light and shadows", while the roof over the courtyard was designed to frame views of the Tepozteco mountain.

Práctica Arquitectura added sustainable elements to La Hacienda Jardín, such as solar panels for its electricity and drainage with a controlled septic tank.

The residence also has irrigation from water catchment systems, as well as natural absorption wells.

Other recent projects in Tepoztlán include HGR Arquitectos' Casa Texcal, a holiday home formed of intersecting gabled volumes, and a wood-and-stone garden home by Rozana Montiel.

The photography is by César Béjar and Oscar Hernández.