Each of the established architects and designers was asked to nominate another Black creative, as a way of championing Black architecture and design. Some chose to nominate more than one. 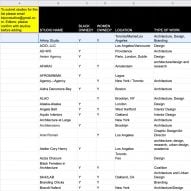 Others decided to delve further into the African diaspora by selecting someone from a neighbouring African country such as Nairobi architecture studio Cave Bureau, who nominated Ugandan-based Doreeen Adengo.

See below for the 14 architects and designers that you should know:

"If you haven't heard of Eve de Haan yet, expect to be hearing a lot more from her over the next year. Based in London and working predominantly in neon, I've been following her works for Half a Roast Chicken for a number of years now – a powerful mix of electric colour and charged words bringing a modern take on personal storytelling.

"From The Saatchi and The Neon Gallery, Eve has been steadily gaining attention also with campaigns with Browns, Monica Vinader and billboard projects around London, and her latest neon exhibition 'Don't Cry Over Spilt Milk' was a slice of pure, colourful joy in the centre of Canary Wharf. Excited to see what she does next."

Terrell Griffith
Nominated by Mitzi Okou, Where are the Black Designers? (WATBD)

"This is a love letter to my WATBD team. Terrell Griffith is a huge part of the beating heart of the WATBD community. He is a silent force that has uplifted and contributed to the major milestones and impact that this organisation has made.

"Griffith is the most thoughtful designer and person I know. He is a quiet spirit whose wisdom has brought such care and thoughtfulness to WATBD products. His practice has really taught me to be caring and respectful towards others. As a master of his craft, he has truly uplifted WATBD to beautiful heights and this community is so blessed to have someone who cares so much.

"The love and passion that this creative has in his heart towards Black creativity has and still continues to elevate not only the WATBD community but Black creatives period."

"Melissa Kacoutie is one of the most prominent Ivorian architects of the moment. In 2016, she opened her own architecture firm – Jeannette Studio Architecture based in the Cocody district of Abidjan. Through her practice, her greatest pride is to hire different people from young women who prove in fact that it is possible for women to work in a sector considered as male-dominated in Africa.

"What I love most about Kacoutie's work is her efforts to blend traditional and raw minimalistic style in a repetition of simple elements to mimic complexity, all endowed with a touch of femininity."

"Doreen Adengo's teaching, research and practice unearths and critiques latent pre and postcolonial architectural manifestations of the African city, enriching her contemporary projects with historical depth and grounding off the shores of Lake Victoria."

"Moran Carl Munyuthe's artisanal practice and artist's residency on the ancient island of Lamu sets a timely reading of Swahili craft, critically inseminated with his contemporary sensibility of furniture design and space production on the East African coast."

"When I think of Hassan Rahim I think of a pure unbounded talent that has all of the raw DIY grit that is familiar to any of us who grew up black and on the fringes in southern California. This is highlighted by the fact that he is completely self-taught.

"Rahim is a shining example to young black creatives that you don't have to go the traditional route to achieve success in a field where we aren't necessarily highly represented. I had the pleasure of working with Rahim on a campaign recently for Ultimate Ears."

"Nifemi Ogunro is a designer who throws a great deal of her emotions into her pieces. This means a lot of her products have soul and there is an emotional attachment you tap into when you encounter them and hear about her unique design approach.

"He is a constant advocate to celebrate the beauty and possibilities in the built environment. He has been a long term talent, teacher, innovator and champion to the architectural industry."

"Yohance Harper is an advocate for the framework and support which is needed to create a design-led built environment. Celebrating and collaborating in what it means to bring it to life within the multiple places he has his hand in.

"He is an inspirational thinker on how development can be handled, with care and detail. He has a creative passion for the education of how to create an innovative development proposal and is the right person to be doing it within the educational field currently an honorary lecturer  at The Bartlett School."

"Dina Griffin, fellow of the American Institute of Architects has been a fierce and phenomenal example of an architect leading in practice through her firm Interactive Design Architects.

"Additionally, she has been a personal mentor of mine for most of my professional career. I can call her anytime for advice or guidance in a space with so few Black women. First 500 is lucky to have her as an advisor!"

"Jean Servais creates objects that look like us. His creations are unique firstly because he leaves his genetic imprint on them by sculpting them himself, and then because he revisits everyday objects in Africa.

"He is a humble and essential designer in my opinion who does not keep his point of view in his pocket, but puts it at the service of the objects he creates and the result is just divine. At each of his exhibitions, I discover a sensitive person whose primary interest is to pay homage to the wood he transforms."

"Emmy Kasbit has revived and almost lost art of textile weaving that is peculiar to the south east region of Nigeria. He works it into modern clothing and in so doing he provides a livelihood for the women in that weaving community."

"I'd like to nominate Zariah Cameron. Based in Atlanta and only a junior in college, she recently made the move from graphic design into UX. An inspiring and passionate force of nature she's a fantastic advocate for young Black women and designers.

"At our annual WATBD design conference last year she impressed our community and audience and held her own amongst the heavyweights. To support her peers and ensure they're starting their career with the correct tools she's established the AEI Design Initiative Programme. Keep an eye on this one!"

"Alicia Ajayi and I became acquainted when we both found ourselves teaching as adjunct faculty members at the Graduate School of Architecture, Planning, & Preservation at Columbia University last year.

"Ajayi is a powerful force for radical Black place-making within a mostly white male academic setting. With an uncompromising and critical voice, she designs opportunities for Black agency in an effort to correct accepted historical narratives in favour of Black self-determination.

"Her research is critically important because it seeks to counteract persistent oppressive practices and pedagogies which form the foundation of Western design thought leadership."