Barcelona-based Majoral Tissino Architects has modernised a house in the historic Spanish village of Cruïlles, adding living spaces to the vaulted ground floor and creating a studio that opens onto a secluded terrace.

The house, which features stone load-bearing walls and a traditional tiled roof, is positioned at the junction of two narrow streets in the centre of the medieval village in Catalonia's Baix Empordà region.

Prior to the refurbishment, the property's interior comprised a sunken ground floor with a vaulted ceiling and an upper floor that was subdivided into several rooms. The studio was tasked with renovating and rearranging the spaces to better suit the owners' requirements.

"The brief was quite unusual as the first house already fulfilled all habitability requirements," the architects explained. "The new functional programme includes a broader living room, a studio open to a courtyard and a new room."

The project involved linking the two houses together on the ground floor through the creation of a new opening next to the stone outer wall.

This passage leads into a living space with a vaulted ceiling that spans the entire width of the building. The room is divided into different zones by a cast-concrete construction incorporating various levels, steps and podiums.

A U-shaped seating area on one side is sunken slightly below the main floor and faces a plinth supporting the television. Steps ascend to a cocktail area with a floor-level fireplace positioned beneath a concrete arch.

The corridor that extends through the space is angled inward slightly away from the stone wall and is mirrored by a curved panel added to the ceiling that helps to emphasise the gradual widening of the room.

"The concrete topography is broadened diagonally to produce a 'prospectic' cone," said the studio, "expressed in the vault's unique finish and opening towards the stair cluster allowing access to the upper floor." 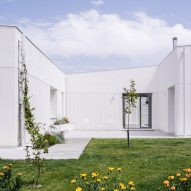 The concrete switchback staircase at the end of the living area incorporates an arched section that echoes the form of the ceiling.

A new window added to the west elevation allows natural light to reach the circulation area and the living space, which previously only received light from two small, north-facing windows.

Another window on the opposite side of the room introduces light from a patio between the two houses. The new opening is set behind an angular frame described by the architects as an 'embrasure', which is traditionally a bevelled opening in a wall or parapet.

The concrete steps connect with another metal stair leading up to the new studio space, with a toilet and kitchenette off the adjacent landing.

A large east-facing terrace was created next to the studio, with full-height sliding doors allowing the interior and exterior spaces to be opened up to one another.

The studio's concrete floors extend out onto the courtyard, enhancing the connection between the spaces. A bench inserted along the existing stone wall incorporates a water spout that creates a soothing sound as it pours into a trough below.

A final set of steps ascends from the studio to a mezzanine bedroom slotted in beneath the gabled roof. Windows lining this secluded space provide views of the village's historic tower and the Montgrí mountain range beyond.

Elsewhere in Spain, architecture studio Sara Acebes Anta built a villa that boasts a pared-back colour palette, while Horma Studio designed a home comprised of a number of geometric volumes.