This home on the side of a hill in Ecuador was designed by El Sindicato Arquitectura to provide maximum privacy to its owners and their two daughters.

Located in the Cumbayá district of Quito, the Slope House project was completed for a family that wanted private living spaces, plenty of outdoor areas, and a home that would make the most of their views of the nearby Ilalo volcano.

The project encompasses 200 square metres, and was completed last year.

"As a conceptual strategy for the project, the required spaces were defined to be highly segregated as an answer to solve the independence need between them," said Quito-based firm El Sindicato Arquitectura.

"It was determined that all the spaces will be connected only by a path that follows the steep slope of the site at ground level," they added.

The single-storey house is broken into three blocks that step down the hillside, allowing for pockets of greenery to grow between them.

"Intermediate gardens let the users see without being seen, and have a physical or visual connection with the immediate exterior," said El Sindicato Arquitectura.

Guests and residents access the home from the top, where the architects included a living and dining room connected to an exterior space for hosting.

Here, there is an exterior staircase that leads to the roof, which forms a series of three terraces that correspond to the interior spaces below.

The central block contains the owner's bedroom and the kitchen, which was intended to be the heart of the home.

"The intermediate block receives the kitchen which is thought as the main space of the project as is the place where the family gets together for cooking, eating, working and spending time together," said the architects. 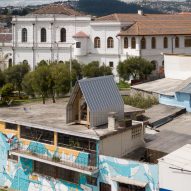 Within the lowest point of the home are the two daughter's bedrooms, one of which has its own terrace, and the other a generously sized walk-in closet.

The architects explained that these differences in layout relate to each daughter's preferences.

"Both volumes have the same dimension, but are designed in a different way defined by their own living routines," said the architects.

The path connecting the various rooms is a combination of a corridor and staircase. Its walls are fully-glazed, offering views of the surrounding nature and mountainous setting.

This circulation is replicated on the rooftop, where a stepped walkway connects the three volumes. Effectively, the home has more exterior space than interior.

Concrete and brick are the main structural materials, and are visible both inside and out. "In this system, the role of the brick is at the same time as a formwork and exterior finish, and also as interior finish in some cases," El Sindicato Arquitectura explained.

Other projects in Ecuador include a home made of concrete and Eucalyptus wood by Bernardo Bustamante Arquitectos and a rural home by Al Borde that uses living trees as structural supports.

The photography is by Andrés Villota.