American artist Theaster Gates has unveiled his concept for this year's Serpentine Pavilion, which will take the form of a wooden pavilion that references Stoke-on-Trent's bottle kilns.

Named Black Chapel, the wooden pavilion will be designed by Gates with support from Adjaye Associates and have an oculus in its roof to help create the feeling of a sanctuary.

A church bell, rescued from Chicago's St Laurence Church, will be placed by the pavilion's entrance and used to announce performances and activities.

According to the Serpentine Gallery, the overall design is a homage to British craft and draws on "the significance of the great kilns of Stoke-on-Trent" that were used for firing pottery.

Black Chapel will be "space of deep reflection"

Gates hopes his design will become a space where people can find rest.

"The name Black Chapel is important because it reflects the invisible parts of my artistic practice," the artist said.

"It acknowledges the role that sacred music and the sacred arts have had on my practice, and the collective quality of these emotional and communal initiatives."

"Black Chapel also suggests that in these times there could be a space where one could rest from the pressures of the day and spend time in quietude," he added.

"I have always wanted to build spaces that consider the power of sound and music as a healing mechanism and emotive force and that allows people to enter a space of deep reflection and/or deep participation."

Structure to be built mainly from timber

Black Chapel takes its name from a project that Gates carried out in 2019, which involved overhauling the central atrium of the Haus Der Kunst museum in Munich, which was originally built for the Nazi regime.

In line with the Serpentine Gallery's sustainability policy, the pavilion will be designed to minimise its carbon footprint and environmental impact.

Mainly made from timber, it will be demountable and relocated to a permanent site after its time next to the Serpentine Gallery in London's Kensington Gardens is up.

Black Chapel, which opens to the public on 10 June,  will host a series of live performances over the summer. 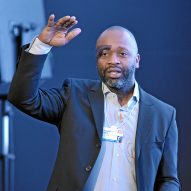 Gates was named as the 2022 Serpentine Pavilion designer last year, making him the first non-architect to receive the annual commission. The Chicago-based artist's previous works include transforming a derelict bank in a low-income neighbourhood into a cultural centre.

Last year's Serpentine Gallery's summer pavilion was designed by South African studio Counterspace. The structure was built from cork and bricks made of recycled construction waste and referenced the experiences of London's migrant communities in its design.

Previous pavilions have been designed by some of the world's best-known architects including Frida Escobedo, Bjarke Ingels and Sou Fujimoto.

The renders are by Theaster Gates Studio and the portrait is by Sara Pooley.