Argentine architect Fabrizio Pugliese has incorporated both handcrafted and industrial elements while creating a family's holiday home just outside of Buenos Aires.

Casa Monopoli is located in San Vicente, about 50 kilometres from downtown Buenos Aires. The project serves as a weekend home for a couple with a daughter who is an industrial designer.

The 155-square-metre house was designed to embody two systems: "a handcrafted one and an industrialised one", said architect Fabrizio Pugliese, who leads an architectural practice in the Argentine capital.

Rectangular in plan, the home consists of low-slung, rectilinear volumes formed of white-painted brick and metal. On the front elevation, the architect added screens made of kiri wood.

The home sits atop a concrete slab that is lifted slightly above the ground.

"The thickness of the slab at the edge was reduced to give an effect of lightness, like the rest of the operations in the house," said Pugliese.

The dwelling is topped with a series of barrel vaults made of local red brick – which the architect described as the handmade aspect of the project. At night, uplights illuminate the roof and emphasise its arched shape.

To build the distinctive canopy, bricks were placed on a wooden mould, and a four-centimetre layer of concrete was then placed on top.

"The structural system is called 'ceramica armada', taken from Eladio Dieste," said the architect, referring to the late Uruguayan engineer who was known for creating thin, vaulted roofs.

The project's industrial aspect is found in the steel beams that make up the structural frame. This framework extends beyond the home's walls to help support the roof and balance the overall structural composition.

Crescent-shaped openings between the roof and the walls are filled in with glass.

"The gaps highlight the structure and allow light to enter, tinting the house with reddish reflections," said Pugliese. 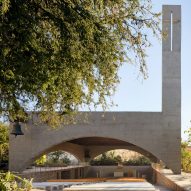 Within the dwelling, there is a clear separation between public and private.

The front portion of the home contains two bedrooms, a studio and a bathroom. There also is a carport, which runs along one side of the house.

The rear area holds a kitchen, dining area and living room. A wide, sliding door connects to a patio with a built-in grill and a grassy yard.

Between the private and public zones is a room with a flat ceiling and a wood-burning stove. It adjoins a central patio that brings in daylight.

"The site does not have favourable orientation," said Pugliese. "It is from this situation that a courtyard is created in the centre of the house, in order to have direct light from the north."

Interior finishes include smooth concrete flooring and white-painted walls. In the kitchen, cabinetry is made of medium-density fibreboard with a guatambu wood veneer.

The homeowners participated in the construction of the home's furniture, given their love of art, carpentry and painting, said Pugliese.

Other recent Argentinian houses include a white house by S_estudio that is wheelchair accessible, a house along a golf course by Mariano Fiorentini that looks like a "huge block of concrete", and an isolated dwelling by architects Nicolás Barrionuevo and Juan Villanueva that is wrapped in operable wooden screens.

The photography is by Javier Agustin Rojas.