The London-based studio has planned the layouts and finishes for 253 apartments in the former power station, which is currently being redeveloped by architecture firm WilkinsonEyre.

To make the most of the available space, Michaelis Boyd developed more than 100 different apartment layouts.

For the fixture and finishes, the studio developed two distinct materials palettes for the homes, referencing different aspects of the building's history and architectural character.

The first palette, called Heritage 33, takes inspiration from the 1930s, the decade when the power station was built.

Dark chevron-patterned flooring references the parquet found in the space known as Control Room A, which at one stage was responsible for poviding a fifth of London's electricity.

The style is more minimal, with lighter toned wood flooring and pale walls. 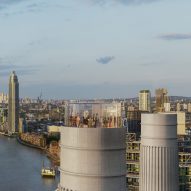 "The residences have a refined industrial quality to them," said Michaelis Boyd co-founder Alex Michaelis.

"We wanted to create interiors that would reference the power station's rich history but also stand the test of time, for the ultimate experience of modern city living."

In both palettes, details are designed to complement the building's architecture. Kitchen tiles echo the exposed brick walls, while copper details nod to the more industrial elements.

Glass screens and doors take their cues from traditional Crittall windows, allowing plenty of light to filter through the homes and offering residents more flexibility in their living spaces.

Residents also have access to a large rooftop garden located above one of the building's historic turbine halls.

"Looking forward into 2022, there continues to be a focus on the importance of outdoor space and a connection with nature," said Michaelis.

"At Switch House East, large Crittall screens and dual-aspect glazed windows were designed to make use of natural daylight, encouraging flow between spaces and offering views out onto the riverside and landscaped courtyards and terraces, bringing the outdoors in," he continued.

"The open-plan layouts of these loft-style apartments also remain more relevant than ever, as we continue to design versatile spaces that will lend themselves to news way of living, working, eating and relaxing from home."

The Grade II* listed Battersea Power Station was designed by Giles Gilbert Scott. It was in use from 1933 until 1983, and has been abandoned ever since.

Numerous designs were proposed for the building over the years. Architect Terry Farrell suggested converting it into a park, football club Chelsea wanted to turn it into a stadium and Rafael Viñoly designed a skyscraper to sit next door.

WilkinsonEyre's design will turn the turbine halls into a shopping centre, while other parts of the building will contain restaurants, events spaces and offices, including Apple's London campus.

The iconic chimneys will be refurbished, with one set to contain a glass viewing elevator.