Curator and historian Maria Nicanor has been announced as the new director of the Cooper Hewitt, Smithsonian Design Museum after a lengthy interim period following the resignation of former director Caroline Baumann in 2020.

Nicanor, who will officially start the role on 21 March, joins the museum as it celebrates its 125th anniversary and will be responsible for a collection of approximately 215,000 objects, as well as 86 employees and a $15 million annual budget.

Her role will involve leading the Cooper Hewitt museum's programme of exhibitions, which includes a newly launched digital exhibition platform.

Nicanor will also oversee various educational projects such as Cooper Hewitt's annual National Design Awards, a renowned initiative that aims to highlight the power and importance of design.

"Joining the Smithsonian family and building upon Cooper Hewitt’s past successes provides the opportunity to bring together the three most important pillars of my career: design and architecture, public service and museum work," Nicanor said.

"We can’t ignore that it’s a particularly complicated time for museums in general right now. Not just what we do, but how we do it, for whom and with whom, are essential questions for design museums to consider."

Nicanor will "help Cooper Hewitt reach  audiences around the world"

Nicanor is an architecture and design curator, historian and the executive director of the Rice Design Alliance (RDA), a public outreach programme run by Houston's Rice School of Architecture since 1972.

Born in Barcelona, she has an extensive history of work in art and design museums including the Solomon R Guggenheim Museum in New York and London's V&A. She also led the opening of the Norman Foster Foundation in Madrid. 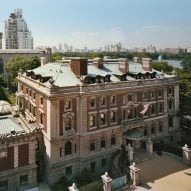 "Maria has an impressive passion for design and a thorough understanding of the impact it has on our shared future," said Lonnie Bunch, secretary of the Smithsonian.

"Her vision and leadership will help Cooper Hewitt reach even more audiences across the nation and around the world."

Located on Museum Mile in New York City's Upper East Side, Cooper Hewitt, Smithsonian Design Museum is one of 19 museums attached to the Smithsonian Institution, the world's largest museum, education and research complex.

Nicanor's appointment to the museum follows the resignation of Caroline Baumann, who served as director from 2013 to 2020 but resigned after an investigation into her conduct in acquiring a wedding dress and venue.

Ruki Neuhold-Ravikumar and John Davis have acted as interim directors since 2020.