New York's Cooper Hewitt is trying to tackle the global challenge of climate change with its sixth design triennial, Nature. Director Caroline Baumann picks out five of the most forward-thinking designs in the show, covering issues such as animal extinction and plastic pollution.

The Cooper Hewitt Design Triennial, which opened on 10 May, takes over two floors of the Fifth Avenue museum, as well as its garden. It features projects by designers, biologists and scientists, with a large focus on combatting the effects of climate change.

"The exhibition as a whole is meant to be a call to action at this moment in our history when climate change is one of the most important global challenges facing us today," Baumann told Dezeen.

One million species on the verge of extinction

There are 62 projects in the show, covering a wide range of fields. Works are grouped into seven categories: Understand, Simulate, Salvage, Facilitate, Augment, Remediate and Nurture.

On the whole, the show places a real focus on the role humans have played in global issues. Animal extinction gets a lot of attention, in line with the recent UN report that revealed that a million species of plants and animals are on the verge of extinction. 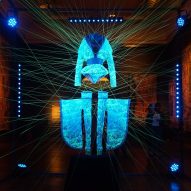 "Several projects focus on extinct species, and we want people to realise how dire this loss is," said Baumann. "The UN report was unbelievable and shows how timely this exhibition truly is."

Exhibition to inspire "conversations and change"

The Cooper Hewitt's triennial is one of several major exhibitions addressing the issue of climate change this year, along with the Triennale di Milano show Broken Nature, The Factory of Living at Centre Pompidou and Eco-Visionaries, which moves from Lisbon's MAAT to London's Royal Academy.

In an interview with Dezeen when the exhibition was first announced, Baumann said there has never been a more critical time for design exhibitions to focus on the environment. She still believes this is true, but stresses that action must follow.

"We're aiming to make them more than exhibitions, but real inspiration to conversations and change," she added. "[We're] thinking about how can we come together and unify through design and collaboration with other human beings."

Nature is on show until 20 January 2020, and a concurrent exhibition is also running at the Cube museum in Kerkrade, the Netherlands.

Read on for Baumann's picks of the five must-see projects in the show:

Vienna studio Mischer'Traxler has brought its Curiosity Cloud, which debuted at the V&A in London, to form the entrance to the exhibit. It comprises a series of glass bulbs filled with fluttering, hand-made insects.

"Curiosity Cloud was customised for Cooper Hewitt and is meant to raise awareness for our visitors the minute they enter the museum," Baumann told Dezeen. "What you're seeing is a variety of species – some endangered, invasive, or local species – each one different from the next."

"The designers have made these so meticulously, that if you look carefully, you can see all the details of each insect like the bumblebee – one of the bees has two little white dots on its bum that identifies it as a particular kind of bee," she added.

The activity of the hand-made insects responds to the movement of visitors. The insects buzz more rapidly with more people in the room, hitting the sides of the hand-bulb glasses. They slow down as the surrounding space quietens, offering visitors a moment to view them more carefully.

"The project is activated by human presence, so as you walk through you hear this incredibly delicate sound," Baumann continued.

"They slow down once there are fewer people in the room. Only then are you able to see how carefully each one is painted."

Contemporary artist Sam Van Aken has planted a hybrid tree in the museum's garden that is set to grow with 40 different varieties of fruit by summer. Called the Tree of 40 fruit, it forms part of Aken's ongoing series of the same name, which aims to preserve varieties of fruit that are becoming less common.

"Sam Van Aken is an artist who collaborated with botanists and biologists to bring back some heirloom fruit varietals," said Baumann.

"Plums, apricots, peaches, etc, some of which have not been seen in years, are combined into one tree using ancient grafting techniques."

In addition to its produce, the tree will eventually bloom in various tones in the summer, as shown in the picture above.

Designer and researcher Neri Oxman has installed the colourful Aguahoja II pavilion in the stairwell of the Cooper Hewitt. The sculpture is formed of curved panels that Oxman and her team at Massachusetts Institute of Technology (MIT) created by manipulating natural materials with computation and digital fabrication.

"Neri and so many other designers are looking at how can we rid the world of plastics," she continued.

"We can't get rid of the plastics that currently exist, but we can look into eradicating new plastics in the future. So that's what this powerful project is all about. Behind it is an exercise in materials – different experiments that come out of the Mediated Matter lab."

"The video features a northern white rhino which is now extinct, but brought back to life using data generated by artificial intelligence," said Baumann. "You can actually hear the sounds made by the last male rhino named Sudan."

"It is a very emotional piece because man is the reason that the rhino no longer exists," she continued. "The video starts with a pixelated mosaic in an empty room and as you keep watching the rhino's form becomes lifelike and you can feel like you can almost touch him and you can hear him."

The paradox of the state-of-the-art technology and the lost species is intended to raise questions about humanity's focus on the creation of new things, while neglecting those that already exist.

"This work is an incredibly powerful reminder to our visitors about what we are doing to the planet and species and what we might do and to begin thinking about how to reverse some of this damage," said Baumann.

Italian architect Arturo Vittori is showcasing the Warka Water structure he designed to offer an alternative clean water source for remote communities in the developing world. The system comprises an-easy-to assemble, lightweight bamboo frame with a mesh lining. Rain, fog and dew condense against the mesh and trickles down a funnel into a reservoir at the base of the structure.

"It's made out of readily available materials and is such a poetic creation because what it's doing is collecting dew and rain and fog and you think to yourself – how the heck can that collect anything significant?," Baumann said. "Well, it actually does to the tune of 20 gallons a day."

"And what does that do? That saves people in remote areas from having to travel miles to collect water," she continued.

"Usually those collecting water are women and young girls, so this is also saving them the physical pain they sometimes endure in hauling water from far away. This project specifically is collaborating with nature and embracing nature to save time and resources to free the women and their children to do other things – to be educated to make life richer."