Mexican design studio Palma has renovated and extended a home on the Pacific coast, reorganising the living spaces around a central circular swimming pool.

The San Ignacio project is located near Sayulita, a popular beach destination in the Mexican state of Nayarit.

Palma, a local design studio, was commissioned by the homeowners to refurbish a property that was in disrepair, as well as to extend the home with two flexible rooms.

Located on a lush wooded lot, the existing volume contained the home's bedrooms, but was covered in a corrugated metal roof that leaked during the rainy months, and overheated in the summer.

Palma's first intervention was to replace the roof with a new concrete slab, which includes skylights to provide more light to the interiors.

The centre of the property now contains a circular swimming pool. Its shallow edges create a reflective illusion, while a deeper portion in the centre allows for the residents to cool off properly.

On either side of the pool are two new structures built as part of Palma's brief.

"One functions as a flexible space for photoshoots and different creative expressions, and the second as an outdoor living space that allows a direct relationship with the pool," the architects explained.

"The newly built volumes, one closed and the other open, serve as flexible spaces for different activities in the daily use of the house and maintain a constant relationship with the circular pool placed in the middle of both," Palma added.

The construction of these small buildings resembles the original home, ensuring that the entire project matches harmoniously. 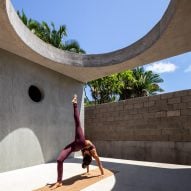 The architects further unified the three structures by improving the landscaping, which involved adding new trees and plants to the already verdant site.

"A landscape project weaves together the existing house and the new additions, mainly through the use of a pavement with buried bricks that seems to disappear as one walks from the house into the garden," Palma explained.

Within the new outdoor living room, the architects designed a thatched roof, which has an opening for an existing palm tree to grow through.

Palma was founded in 2016 by Ilse Cárdenas, Regina de Hoyos, Diego Escamilla, and Juan Luis Rivera. The firm is based in Mexico City, and also operates an office in Sayulita.

Other houses on Mexico's west coast include a series of beach homes built with coloured concrete by Revolution, and a vacation residence with a meditation room topped by a massive circular skylight by Colectivo Lateral de Arquitectura.