A serene meditation room overlooking the Pacific Ocean is lit by a large round skylight in this seaside retreat designed by Mexico City studio Colectivo Lateral de Arquitectura.

The project is located in Playa Blanca, in the Mexican beach town Zihuatanejo. Perched above the Pacific, the area has long been a popular vacation destination, due to its sandy beaches and warm climate.

Colectivo Lateral de Arquitectura designed the home around a courtyard wrapped by a colonnade, to give the owners the most green space possible. The studio said the clients envisioned the home as a getaway for meditation.

"Beyond satisfying an architectural function, the programme of this residence responds to a superior need: the holistic quest of full communion and interaction with the enveloping and traversing nature," said Colectivo Lateral de Arquitectura.

The colonnade culminates at the meditation room, a shaded space covered by a roof, and enclosed only by sliding glass walls. "Due to a remarkable circular opening in the deck of this room, the rain, the wind, the light and the natural habitat are freely and fluidly integrated in this space."

A pool runs from inside this space to outdoors, framing the room and its sweeping views of the ocean.

"A swimming lane integrates into the pool and operates as an alternative access to this area while it dilutes the limits between interior and exterior spaces: there are no borders, the inside is the outside." 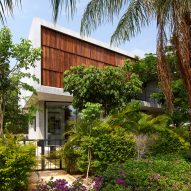 Another key feature of the property is its pale pastel hue tone, which the studio created by adding Tepetate, a type of clay commonly found in the area, to the concrete mix.

"Naturally Tepetate has a reddish colour, so when you add grey concrete you get this characteristic tone that makes the volumes  an imperceptible element within its natural environment," the architects said.

All of the home's spaces open out to the courtyard via the shaded walkway that snakes through the property. An overhanging roof slab with angled edges covers all of the rooms, which the architects laid out in separate volumes according to their function.

The communal areas are located at the back of the home, near the main entrance. They are organised as an open-plan living and dining room, next to the kitchen. A rooftop patio above this space acts as a perch from which residents can enjoy the scenic surroundings.

"The stairs head to a gazebo where it is possible to contemplate the sky, the stars and the immenseness of the ocean," the studio added.

Towards the centre of the 750-square-metre home, two bedrooms are each contained within their own structure, and separated by a breezeway.

To further integrate the owner's quarters with nature, the bathrooms are partially open to the sky. The openings allow for semi-interior gardens that the architects filled with potted plants.

The climate of Mexico's West Coast allows for open, breezy spaces that are practically outdoors.

Other projects that make the most of these conditions include a home enclosed by wooden slats by Magaldi Studio, and a minimalist residence by Zozaya Arquitectos fronted by knotty bamboo stalks, also in Zihuatanejo.

Photography is by Claudio Napolitano.