A competition has been launched to find an architect for the expansion and sustainability-led revamp of Zaha Hadid Architects' Stirling Prize-winning MAXXI museum in Rome, Italy.

Launched as part of a project called the Grande MAXXI Master Plan, the competition invites proposals for a two-storey multifunctional extension to the contemporary art museum.

The winning design will be realised alongside improvements to the environmental performance and public realm of the existing museum that Zaha Hadid Architects completed in 2009.

Organised by the MAXXI Foundation, the Grande MAXXI Master Plan and extension are slated for completion in 2026.

According to the competition brief, it is being developed to better align the museum with what it describes as the "new world".

"More than ten years after opening to the public, the museum designed by Zaha Hadid, the MAXXI National Museum of 21st Century Arts in Rome intends to confront the challenge represented by a further innovation, marked by sustainability and state-of-the-art technologies," the brief states.

"The museum, which has achieved important milestones in attendance, international reputation and solid management, has developed the Grande MAXXI Master Plan to confront the 'new world' being shaped by important environmental, financial and health crises."

The MAXXI museum, which is known fully as MAXXI National Museum of XXI Century Arts, was designed by Zaha Hadid Architects on the site of former 19th-century military barracks in Rome.

It is the first national institution in Italy dedicated to contemporary art and architecture and was the recipient of the prestigious RIBA Stirling Prize in 2010.

The competition will see the museum extended with two storeys of collaborative research, training and storage facilities, positioned on a plot north of the building.

Named the MAXXI Hub, this will form the centrepiece of the Grande MAXXI Master Plan and will be linked to the Zaha Hadid Architects-designed museum by a green roof.

As part of the plans to improve the environmental performance of the existing museum, approximately 3,000 square metres of solar panels will also be installed on its roof.

A new public green space, named the MAXXI Green, will also be introduced, offering outdoor space for installations, events and vegetable gardens to grow food for the museum's eateries. As part of this update to the landscape, any accessibility issues at the current museum will also be rectified. 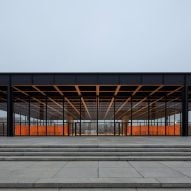 The overhaul, led by David Chipperfield Architects, involved refurbishing the building's ageing structure and exterior while modernising its services.