The setting for some 2022 Winter Olympic events within a former steel mill in Beijing has been widely criticised for its dystopian aesthetics, but it should be seen as an exemplar reuse project, says Aaron Betsky.

When the first images of competitions currently being held at the 2022 Olympics in Beijing flashed across the world, the reaction on my social feeds was instant.

Seeing the industrial buildings behind the Big Air Shougang ski jump, my friends and contacts typed in messages such as: "This is horrid, I can't believe this is allowed." "Olympics in a nuclear power plant?" another asked.

Even the redoubtable critic Matt Shaw (although he later corrected himself), posted on Facebook: "This has to be psyop, no? Using these images to broadcast some kind of image about Chinese infrastructural success? Nuclear power as 'clean' energy? What are they saying?"

They weren't the only ones. Western media outlets ranging from Newsweek to Vice piled on with comments on what they saw as dystopian settings, although they had to report that most of the athletes there seemed to enjoy the views. So what is going on? Did the Chinese government really put the Olympic Games in their version of Chernobyl?

In fact, the site surrounding the ski jump is a shining example of what we should be doing a lot more of, and what the Chinese are, as usual, rolling out at a vast scale: repurposing old industrial sites for new uses.

The site where, along with the ski jump, the Olympics main offices and one of the Olympic Villages is located have been built or created from repurposed structures, was once the largest steel mill in the world. The government now calls it the New Shougang Comprehensive High End Industry Services District.

Decreed by former president Mao Zedong as part of his drive to turn China into an industrial powerhouse, its 2,200 acres of plants polluted the capital area for half a century until it was shut down in 2011. As part of the effort to clean the air for the 2008 Olympics, the government also installed giant air scrubbers on the site that were meant to suck in pollution and blow out clean air: those are the concrete cylinders that some observers thought were nuclear power plant cooling towers. 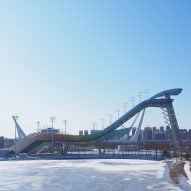 I have to assume that part of the government's thinking was that they wanted to avoid the disastrous waste of resources the 2008 games turned out to be, by eschewing as much as possible the construction of new stadia that would, like the famous Bird's Nest designed by Herzog & de Meuron, sit empty after the events were over.

They reused the Bird's Nest for the opening ceremonies of this games, but it was the first time since 2008 the venue has been fully utilised, even if Covid meant it was still mainly empty.

Some structures were built, including that ski jump and a snazzy ice skating arena. A vast amount of infrastructure also connects the capital to the remote locations in the mountains. From an environmental standpoint, the real crime of these games was the fact that it relied almost completely on artificial snow, wasting a tremendous amount of water in a part of the world already heavily stressed by drought conditions and urban growth.

The games were also meant to promote such nascent new resort industries as skiing, which the Chinese had taken to with great gusto before the pandemic, and whose environmental impact is also overwhelmingly negative.

Little of that, though, was visible on television. What viewers saw, or thought they saw, was an industrial landscape serving as a backdrop to the stylized movements of Olympic contenders.

The heavy metal vision behind skiers flying in mid-air reinforced a by now at least partially outdated notion of China as the world's factory, where all the stuff we consume is made in a way that exploits labor and fouls the environment, thereby saving us from doing the same.

What was on display in the reactions was a bit of guilty consciousness. Here was the return of the industrial revolution, which we had thought was now either in the past or outsourced to a country far away, that got us all the goodies making our lives so seamless. Here was also China's raw might, overwhelming the more advanced, but also more delicate figures of the athletes.

The Olympics site is beautiful, and it distresses me that the way it is being filmed and interpreted

As somebody who continues to argue that we need to concentrate on reuse and adaptation before we waste any more resources we cannot replenish on new buildings, this reaction is unfortunate and a bit of a surprise.

The Shougang Olympics site, which I visited right before the pandemic closed access, is a prime example of reuse elegance, filled with hotels that let you admire the remnants of industrial might and parks that let you saunter past old cooling ponds that are now habitats for ducks and geese. 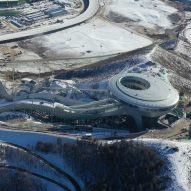 Dezeen's guide to the architecture of the Beijing 2022 Winter Olympics

It uses the ruinous state of formerly grand forms to remind us of the sublime qualities of industry, while opening up places that are scaled to human beings and bring nature back into the urban setting.

The Olympics site, in other words, is beautiful, and it distresses me that the way it is being filmed and interpreted reveals little of the care numerous designers, under the guidance of overall planners CCTN, have taken to create countless well-thought-out spaces and places (and a few awkward ones, as well as some awful new additions) in a manner that will let this area become a thriving neighborhood in the manner of such success stories as 798 Factory in Beijing or OCT in Shenzhen.

The Olympics site is neither China's reminder to us of its industrial might, nor a memento mori

Finally, the fact that observers assumed that this was all fake is also distressing. Architects are so good at faking their renders that they assume every image is a client presentation. It also points to the profound and deserved distrust we have of governments and news media alike, but also to a climate of perception based on the condition that several generations of observers have now grown up playing video games that are all too often set in the ruins of our situation.

They thus assume that everything they see on a screen that reminds them of our own imminent demise is a stage set made out of pixels.

But no, the Olympics site is neither China's reminder to us of its industrial might, nor a memento mori. It is an all too rare moment of hope at a large enough scale to make a difference that we can reimagine our future in a more sustainable and beautiful way exactly by building on and in the examples of our past mistakes.