The 148-room hotel is located within a former private club that was designed by architecture studio Curlett & Beelman in the 1920s.

Real estate developer The Kor Group teamed up with Wearstler to transform the building into Downtown LA Proper, with Wearstler spearheading the interior design.

According to Wearstler, the hotel's interiors take cues from LA's "creative scene", as well as the colours and forms of Mexican, Moroccan, Spanish and Portuguese design.

"My point of reference for the Proper Hotels is always the location, so Downtown LA Proper really called for bold and eclectic choices," she told Dezeen.

"As the design of the hotel was greatly inspired by the community and history of the area, I used a deep, warm, colour and feel throughout to speak to this rich culture and history," added Wearstler.

"The [hotel's overall] design comprises 136 unique types of tile, from vintage to custom."

Visitors enter the hotel via the building's original ornate archway, which is flanked by column-like cacti in rustic pots, where they are met with a graphite reception desk designed by ceramicist Morgan Peck.

The original pink and white checkerboard floor tiling was retained in this area, while the ceiling is decorated with a hand-painted multicoloured mural designed by Abel Macias, which drew on the flora and fauna of Mexican folktales.

This eclecticism is also reflected in Downtown LA Proper's guest rooms. Wearstler blended contrasting elements such as chunkily-patterned headboards with smooth wooden floors, while the walls vary within a spectrum of charcoal, mauve, dusty blue, umber and ecru.

The building contains three eateries including the lobby-level Caldo Verde restaurant and bar, which Wearstler designed to reflect the rest of the hotel's interiors. 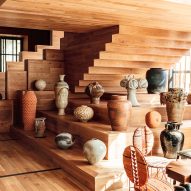 A collection of vintage rugs and seating, cocoa and sandstone tiles and jungle-like plants are set against a bespoke stained-glass installation by Judson Studios that makes up the restaurant's doorway.

"The building itself is a historic-cultural monument, so we wanted to maintain some of the original integrity and fabric, like the window casing and brickwork, while elevating it with contemporary jewel tones, patterns and plasterwork," said Wearstler.

"I truly wanted to embark on a spirited exploration of materiality, colour and form, to share with guests a hyper-localised flavour of the city and create a hub for local creatives."

Wearstler founded her eponymous interior design studio in 1995 and is responsible for the eclectic interiors of several other Proper hotels including its San Francisco and Santa Monica outposts.

The designer also recently transformed a 1950s beachfront cottage in California into a bohemian retreat for her family.

The images are courtesy of Kelly Wearstler.