Berlin studio Behles & Jochimsen Architekten has renovated and extended the Nuremberg Chamber of Commerce and Industry offices in Germany, adding sandstone-clad buildings that tie in with the area's historic architecture.

Named the House of Commerce, the headquarters is located on a prominent site in the oldest part of Nuremberg, between the main market square and the medieval church of St Sebald.

Behles & Jochimsen Architekten was tasked with reorganising the existing headquarters to create more cohesive and practical offices for the organisation, which provides support to local businesses.

Several structures listed as historic monuments were preserved and restored as part of the scheme, while some modern additions to the site were demolished and replaced to improve circulation.

Behles & Jochimsen Architekten's additions replace buildings that were not protected and had no significant architectural merit. Those that were restored date back to the 1950s and 1960s.

The extensions follow the original building line and align with the existing eaves, while their proportions and choice of materials also respect the heritage of the site.

"The new buildings adapt design features of the old town, such as the sandstone facade and the pitched roof with plain tiles," the architects explained.

"They pay homage to the architecture of the reconstruction after the war that characterises the townscape. The folded eaves windows respect the historic eaves heights."

The headquarters' main entrance was moved to the busy Waaggasse street to give it greater prominence. Now visible from the nearby market square, it is set back from the facade and framed by a sculptural portal.

A previously open area on the west side of the site was filled in, allowing an existing central courtyard to be transformed into a glass-roofed atrium.

This four-storey atrium functions as a reception and service point for customers, as well as a flexible space for hosting exhibitions and events. It also helps to rationalise the previously complicated circulation between different parts of the headquarters.

The two new wings are positioned on opposite sides of the atrium, connected by bridges. The facades of the existing buildings remain visible behind the bridges, which recall the wooden arcades found within traditional Nuremberg houses.

Inside, the new wings contain spaces optimised for flexible office use, including areas beneath the eaves which are narrower than the main floors and benefit from higher ceilings.

In the older buildings, the original spatial organisation with a more traditional arrangement of rooms and corridors has been retained.

Materials used throughout the project reflect the region's traditional building methods. The bases of the extensions are clad in dark Wuestenzell sandstone and align with the plinth of the original corner building.

A lighter Schweinstaler sandstone used across the upper portion of the facades includes subtle tonal variations. Simple roof tiles were chosen to match those found on neighbouring buildings. 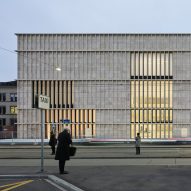 Oversized windows, which are flush-mounted into the stone cladding, introduce a modern detail to the facades. The windows fold over the building's eaves, with further skylights illuminating the interiors from above.

The building's interiors feature natural and hard-wearing materials such as the pale-green stone used for flooring and counters in the atrium. Jura stone used for the corridors and staircases references the floors of the old buildings.

Light-coloured walls and wooden doors create a warm and muted atmosphere in the offices. Oak-framed ceiling panels with integrated lighting optimise the acoustics in these spaces.

Behles & Jochimsen Architekten was established in 1999 by Armin Behles and Jasper Jochimsen and has worked on several projects involving the conversion of listed historic buildings.

In Perth, OMA and Hassell also recently took on the challenge of preserving and extending a group of heritage buildings.

The five existing buildings, which date back as far as the 19th century, were restored and linked by contrasting, contemporary structures to create a museum that celebrates the history of Western Australia.

The photography is by Marcus Bredt.