Architecture studio Assemble is one of the creators behind Dreamachine, an immersive art installation that will take place later this year as part of the Unboxed: Creativity in the UK festival.

Events producer Collective Act has conceived Dreamachine as a touring art installation that draws on the "ancient" phenomenon that flickering lights can be used to create colourful patterns behind closed eyelids.

"The use of flickering light to create vivid visual experiences can be traced as far back as ancient civilisations when communities would congregate around campfires and peer into the shimmers," said Collective Act.

"Today, the phenomenon is known to researchers as 'stroboscopically induced visual hallucinations' – and this provides the scientific foundation for the entire Dreamachine project."

Visitors will enter the "machine", a room designed by Turner Prize-winning London architecture studio Assemble, and lie down while listening to a musical score by electronic music artist Jon Hopkins.

As they relax, pulsating lights are streamed into the room which stimulates the optic nerve, triggering animated, kaleidoscopic patterns of colours behind their eyelids.

The effect is similar to the flurry of flickering tunnel or roadside lights that pass over closed eyes when travelling in a vehicle at night. 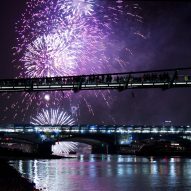 Collective Act based Dreamachine on an invention artist Brion Gysin devised in 1959. The original device comprised a cylinder with holes cut into the sides around a suspended light, which is placed on a record player.

As the light spins, it projected light at a rate that matched the music and corresponds to waves present in the brain during relaxation.

"The primary phenomenon – the rich inner experiences created by the Dreamachine – involves our brain activity matching the frequency of the flickering light," the organisation added.

"Designed to be the 'first artwork to be experienced with your eyes closed', Gysin had a vision for his invention to replace the TV in every home in America," it explained.

Collective Act collaborated with scientists and psychologists from the Universities of Sussex and Glasgow to create the art installation, which it hopes will make us question the power of our own minds and our consciousness.

"Dreamachine is a powerful new kind of immersive experience exploring the limitless potential of the human mind," Collective Act said.

"The team is investigating the idea that flickering lights impose a 'beat' on the rhythms of brain, similar to the 'alpha' rhythm – a brain state normally associated with relaxation," it continued.

Other projects at the UK government-funded Unboxed: Creativity in the UK include Tour de Moon, a series of touring events by designer Nelly Ben Hayoun.

The festival previously had the working name Festival UK* 2022 but became known as the Festival of Brexit, because it was conceived while the UK government was negotiating its withdrawal from the European Union and timed to take place a few years after the UK left.

Artist Richard Littler proposed a satirical poster for "Festival of Brexit Britain", based on the cover of the original guide for the Festival of Britain, which took place in 1951.

Dreamachine takes place from May 2022 in London, Belfast, Cardiff and Edinburgh as part of Unboxed: Creativity in the UK. See Dezeen Events Guide for an up-to-date list of architecture and design events taking place around the world.