London-based designer Richard Littler has created a satirical poster for the Festival of Great Britain and Northern Ireland, based on the cover of the original guide for the 1951 Festival of Britain.

The spoof poster follows the announcement by British prime minister Theresa May of a Festival of Great Britain and Northern Ireland, which will take place in 2022 after the UK has left the European Union.

The satirical poster for the event, dubbed the Festival of Brexit Britain by Littler, reimagines the profile of the nation's symbolic figurehead Britannia shooting herself in the head.

Britannia is framed by a stylised compass illustration with accents of red and blue on white and ochre points.

Poster based on 1951 Festival of Britain graphic

The design is inspired by graphics from the original "festival star" poster by Abram Games – one of Britain's most-recognised 20th-century graphic designers – for the 1951 Festival of Britain, a national event held in London that aimed to support the nation's arts and crafts trade.

The Festival of Brexit Britain.
My poster based on the 1951 original. pic.twitter.com/APZwCM5JBc

The design appeared on the festival's guide, with the price stated as 2/6 (two shillings and six pence). The bottom of Littler's poster reads, "guide price £120 million".

The Festival of Great Britain and Northern Ireland will be backed by £120 million of government investment and is intended to showcase "the UK’s unique strengths in creativity and innovation."

"Given that Theresa May announced her intention for a 'Festival of Brexit Britain', it seemed ripe for satire," Littler told Dezeen.

The proposal for the festival, which was unveiled at the Conservative's annual party conference in Birmingham on 30 September 2018, was described by May as a "nationwide festival in celebration of the creativity and innovation of the United Kingdom". 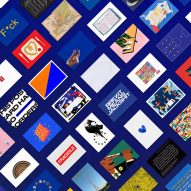 Me & EU book includes over 100 postcards for post-Brexit Britain

"Just as millions of Britons celebrated their nation's great achievements in 1951, we want to showcase what makes our country great today," said May.

But the proposal has been met with criticism from the general public with many news outlets dubbing it a Brexit festival.

"I have to admit that, when I tweeted it early on Sunday morning, I hadn't expected the overwhelming response. It obviously speaks to a lot of people who have become disenfranchised with how Brexit is shaping up and are frustrated with the hubris, ineffectuality, and profound lack of progress," said Littler.

"That it was shared so widely is also a testament to the effectiveness and aesthetic precision of Abram Games who, incidentally, was the son of immigrants," he continued.

Many British designers have explored the consequences of Brexit, including Nathan Smith and Sam T Smith's book filled with postcards made by UK creatives.