Kim Kardashian has hired leading Japanese architects Tadao Ando and Kengo Kuma to build a pair of vacation homes in the US – a "zen" mansion in Palm Springs and a lakeside lodge for celebrating the Fourth of July.

The reality TV star shared details of the projects during a recent interview with Vogue, in which she discussed her ongoing "love affair with architecture, specifically Japanese".

Kuma, who designed the timber-clad National Stadium for the Tokyo 2020 Olympics, is working on a "glass-and-wood lake house" in an undisclosed location, where Kardashian says she plans to spend Independence Days with her family.

Meanwhile, in a private gated community to the south of Palm Springs, Pritzker Architecture Prize winning-architect Ando is designing a two-storey mansion with a curved triangular footprint that has been compared to a spaceship.

The final result will be "concrete, gray-toned, and really zen", Kardashian revealed. 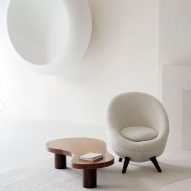 In the Vogue interview, Kardashian explained that her love for architecture began during the seven-year renovation of her Calabasas home, which she shared with rapper Kanye West before filing for divorce last February.

The couple bought the house together in 2014, gutting and reimagining it in collaboration with Belgian designer Axel Vervoordt and architect Vincent Van Duysen to create a building so monochrome and sparsely furnished that Kardashian jokingly describes it as a "minimal monastery".

One of the only exceptions is the guest house, which comes in the form of a traditional samurai home that was shipped all the way across the Pacific Ocean.

"I'm really inspired by Japanese culture," Kardashian explained in an interview with i-D. "Our guest house is actually a samurai's old home that my art dealer, Axel Vervoordt, used to own."

"We got the bones of this old house from Japan and built it into our house, because it had such a different energy, this house has the energy of a warrior."

Kardashian recently acquired full ownership of the Calabasas house as part of the couple's ongoing divorce proceedings, while West purchased a bachelor pad in Malibu that was designed by Ando in 2013.

Although the planning application for Kardashian's own Ando-designed property was filed in November, the construction plans have since been delayed as the local council has requested more information to determine whether the building meets fire safety and pool codes.

The top image is courtesy of Google Earth. Tadao Ando's portrait is by Christopher Schriner via Wikimedia Commons.

More from the Kardashians