Architecture studio RCKa has transformed a row of vacant shop units in west London into a community kitchen and learning space that hopes to reduce dependency on food banks.

Located on the Edward Wood Estate in Hammersmith, Nourish Hub provides the first permanent home for UKHarvest, a charity that uses food as a tool for social impact.

With Hammersmith & Fulham the London borough with the highest dependency on food banks, Nourish Hub's ambition is not only to provide food for vulnerable local residents. It offer opportunities for people to practice cooking skills, learn about nutrition and access jobs in the food industry.

The space includes a commercial kitchen, a teaching kitchen and a flexible space that can be used as a dining room, workspace, classroom or event venue.

RCKa's role was not only to plan the interior, but to find ways of empowering the local community to get involved in the facility and make it their own.

The design strategy focused on making the space – which previously housed a post office and a supermarket – feel as accessible as possible.

The facade can be opened up, thanks to sliding glass doors and a serving hatch, while bright colours and bold signage create a friendly feel throughout.

"Getting people through the door is the first challenge, so the Hub had to seem open and welcoming to the entire community," said RCKa director Dieter Kleiner.

When developing the design, the architects decided against a traditional community engagement programme. Instead, they hosted a range of pop-up activities to attract the interest of local residents and learn about their experiences.

They started by painting a graphic mural over the old shutters. They also set up an outdoor kitchen, created playful questionnaire cards and hosted workshops with children. 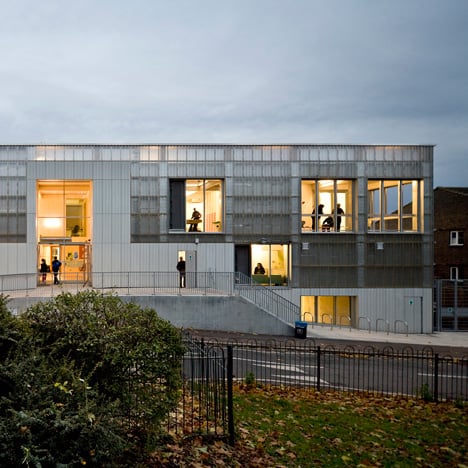 "It wasn't about co-designing the space with local people; that wasn't what we needed," explained project architect Anthony Staples during a press tour.

"We had three aims: to raise awareness of the project, to test ideas and to establish a local identity."

In one children's workshop, participants created graphic designs out of raw fruit, vegetables and grains.

One of these designs is now painted on the ceiling, while another has been turned into ceramic wall tiles.

For the interior layout, RCKa took cues from Victorian kitchens. The teaching kitchen takes the form of a large island, while open cabinets display tableware and cookbooks.

"We were really inspired by old-fashioned kitchens, which are very performative," said Staples.

"Everything is on display, so when you go in, you feel like you want to touch and grab things."

The space is furnished with wooden tables, and chairs in bold shades of red and yellow.

There are also various details added in to make the space accessible to a wide range of users. These include lowered surfaces that cater to wheelchair users and a curtain that supports those with specific privacy needs.

Yvonne Thomson, the CEO of UKHarvest, believes the concept can help to tackle issues of food poverty and insecurity, which impact an estimated 8.4 million people in the UK.

The project was realised with funding support from the Mayor of London's Good Growth Fund, as well as the borough, but the target is for Nourish Hub to become financially self-sufficient within three years.

"Great care has been taken to create a versatile space that enables us to facilitate positive change and meet the needs of different community groups," Thomson said.

RCKa compares the project with its previous work on The Granville, a community centre with the purpose of providing accessible workspace for local startups.

Staples believes these types of projects could easily be replicated across the UK, to bring change at a large scale.

"This project is totally replicable," he said. "We could roll them out in a lot of London boroughs and beyond."

Photography is by Francisco Ibáñez Hantke.