Canadian architect Todd Saunders has shaped this white house next to Lake Rousseau to create a continuous route through its interior and exterior spaces.

Saunders Architecture designed the Lily Pad residence for a Toronto couple that wanted a rural retreat in the Muskoka region north of the city.

The area is dotted with rivers and lakes, and has a particular architectural vernacular that includes cottages and boathouses with ample porches, decks and terraces.

"[The clients] found a 16-acre site on the edge of Lake Rosseau... and began thinking about building something for themselves that would integrate with the setting but also be decidedly modern," said the firm, which is based in Bergen, Norway.

On a trip to Fogo Island – an artists' community off the coast of Newfoundland – the clients visited some of the studios designed by Saunders, and chose to commission him to design their house.

The project encompassed a five-bedroom residence, a separate guesthouse, and a boathouse on the lake. Matt Ryan served as the local architect of record.

"Both the architect and his clients wanted to maximise the sense of connection with the landscape, while creating a home with a dynamic and original character of its own," the Saunders Architecture team said.

The main house comprises two rectangular bars arranged in a cross formation, one on top of the other.

Two ends are joined together to form a square on one side, resulting in a continuous "ribbon-like" form thanks to an angled section that bridges the level change.

Entered via a covered carport, the ground level has four bedrooms and ensuite bathrooms. A staircase next to the door leads directly upstairs, thanks to its placement at the intersection of the main volumes.

An alternative route to the first floor is via the media room, where stairs and bleacher-style seating follow the inclined portion of the building.

The house can also be accessed from a grand exterior staircase that rises from the lake to the glazed upper facade that overlooks it.

Sliding panels open to a formal dining area and more casual lounge seating on either side.

"When the glass slides back, this space becomes – in effect – an enticing open porch, or 'Muskoka room'," the studio said.

Fireplaces divide the open-plan living space from the kitchen on one side and the main bedroom suite on the other.

"Floating beyond the main body of the house, the master bedroom levitates in a dramatic manner, becoming a lookout station facing the lake view to the front," said the firm. 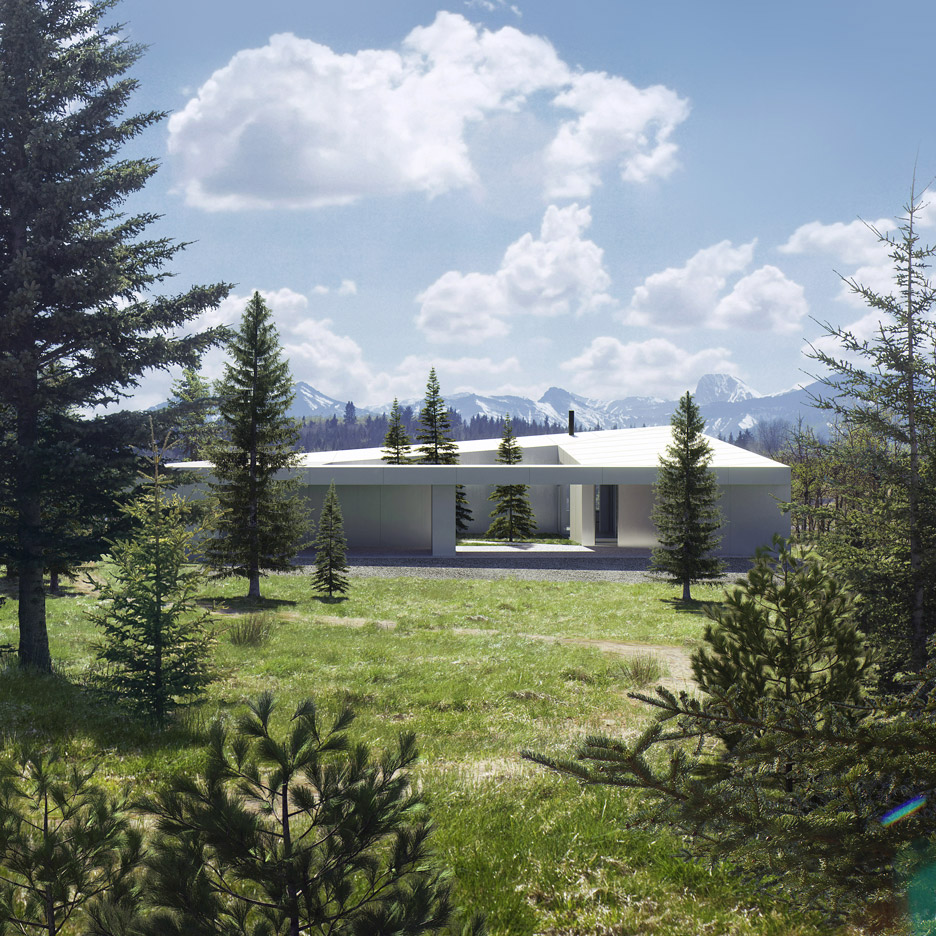 Continuing the axis from the external stairs, more glass doors lead out to the roof.

An outdoor route traces the circulation path inside, rising up over the media room to reach the top terrace, which is also accessible by elevator.

"The roof terrace becomes the final destination within an ambitious 'promenade architecturale' – somewhat reminiscent of the journey seen at Le Corbusier's iconic Villa Savoye – that takes you up from the ground plane towards the floating first floor and, finally, to the roof," said Saunders Architecture.

The guest house has a similar modernist aesthetic as the main residence, while the boathouse is clad in timber to reference the local boat-building tradition.

"The details and palette are reflective of the hues and patterns of the water, sand and stone native to Muskoka," the firm said.

Originally from Newfoundland, Todd Saunders founded his studio in 1998 and has worked extensively across Norway, Canada and beyond.

He designed his own house in Bergen with blackened timber cladding, and recently completed a white house overlooking the city in collaboration with Swedish design practice Claesson Koivisto Rune.