Only a handful of spruce partitions carve up the pared-back interior of this London office, which McLaren Excell has created for Samsung's European design studio.

Set inside a 21-storey tower known as the Can of Ham building, Samsung Design Europe is one of the tech company's seven product design hubs across the globe, with other outposts located in the US, China, Brazil, India, Japan and South Korea.

Local architecture studio McLaren Excell said it devised the minimalist interior for the London headquarters to "consign the formality of the workspace to the past".

"[The office] instead embraces a more relaxed, informal and experiential place of work," explained the firm's co-founder Luke McLaren.

"We want the Samsung office to have all the qualities that are enjoyable about your home – a softness, a sense of calm, a high degree of tactility, spaces to congregate, spaces to which one can withdraw – but all the while nurturing that sense of welcome, of belonging, of enjoyment."

As a result, the office features just a handful of glue-laminated spruce partitions that loosely split the floor plan into private meeting rooms and communal zones where staff members can engage in more collaborative work.

Spruce glulam also forms a series of vertical fins, which appear at intervals along the office's windows.

In the breakout area, the same pale-toned timber was used to craft the dining table, counter and benches.

Grey linen curtains that hang from tracks on the ceiling can be used to further divide up the open-plan office while bringing a sense of tactility to the interior.

In an effort to make the HQ seem more relaxed and inviting, planters overspilling with foliage were embedded into the top of the desk banks. 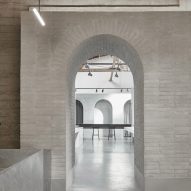 McLaren Excell also abandoned a traditional lighting grid in favour of fitted lamps, which illuminate pockets of the office in more targeted and intimate ways.

The architecture studio was founded by Luke McLaren and Robert Excell in 2010 and is based in London's Chelsea neighbourhood.

Recent projects by McLaren Excell include a bathroom showroom in Los Angeles with arched doorways and altar-like tables reminiscent of a church.