Elon Musk's infrastructure firm The Boring Company has submitted plans to construct the North Miami Beach Loop tunnel in Miami, which would shuttle people in a dedicated fleet of Tesla cars from the north of the city to the beach.

The six-mile-long tunnel would connect the commuter railway station at Golden Glades with Sunny Isles Beach on the city's eastern coast, according to a proposal seen by Business Insider.

"Cars and trucks stuck in traffic generate megatons of toxic gases and particulate," Musk tweeted. "Road tunnels under Miami would solve traffic and be an example to the world."

If approved, the tunnel system will have seven stations and could transport around 7,500 passengers an hour.

Rather than opening up the underground routes to all types of cars and their drivers, the tunnels would be serviced exclusively by electric vehicles from Musk's car brand Tesla.

Pedestrians would catch a ride in one of these vehicles, which unlike trains and buses would carry them directly to their destination without taking multiple stops in between.

This system is eventually meant to function autonomously with the help of self-driving cars travelling at up to 150 miles per hour, compared to the usual maximum of 65 miles per hour reached by underground trains.

But until the relevant technology is developed and approved, the cars would need to be manned by human drivers much like in The Boring Company's three-stop transit tunnel system underneath the Las Vegas Convention Centre (LVCC), which opened in April 2021.

Musk argues that Loop systems like this could offer a more efficient alternative to traditional public transport, which he described as "a pain in the ass".

But his concept, jokingly known as "Teslas in Tunnels" has been criticised for effectively reinventing buses while carrying far fewer people.

The North Miami Beach Loop would have an initial carrying capacity of 7,500 passengers an hour that could ultimately be scaled up to 15,000 people, according to The Boring Company's proposal.

Its original 6.2-miles route could also be extended to the northwest to connect to the Hard Rock Stadium, which is home to the Miami Dolphins football team, as well as to the southeast to service Florida International University's waterfront Biscayne Bay Campus. 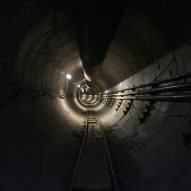 With an expedited permitting process, The Boring Company estimates the system could be constructed in less than three years for between $185 million and $220 million.

This compares to subway extensions in New York and Los Angeles, which are set to cost $6.9 billion and $8.5 billion respectively.

The firm says it's able to construct "mega-infrastructure projects in a matter of weeks instead of years" and at a much lower price due to its Prufrock boring machines, which dig tunnels and reinforce them simultaneously. But a number of civil and tunnel engineering experts have raised doubts about the validity of these claims.

Expanding and moving forward with plans for the "Vegas Loop." #ClarkCounty Commissioners just approved an agreement with the @boringcompany to establish and maintain a transportation system that will go under the Las Vegas Strip. It will also go to @AllegiantStadm and @UNLV. pic.twitter.com/2ju3xcFq7O

But most of the firm's previous proposals, including a tunnel connecting New York to Washington DC as well as underground transport networks in Chicago and Los Angeles, were ultimately dropped due to regulatory hurdles.

One major exception is the Vegas Loop – a privately-funded extension of The Boring Company's existing tunnel system under the LVCC that is currently under construction.

Once completed, it will have 51 stations across the city and be able to transport 57,000 passengers per hour.

The main photo is by Duncan Hull.

More from The Boring Company