Set in a dark empty room, the presentation consisted of 28 holograms of different models that were beamed into the room using more than a hundred simultaneously running cameras.

Some of the looped, moving projections showed the models pointing or laughing at the audience, while others appeared to be electrocuted or blow bubbles from their mouths.

"The performances were so engaging that many who attended lingered longer than they might have for a conventional fashion show," one reporter wrote.

The event took place in real life in front of a real audience, but the actual presentation of the garments was entirely digital, which according to Maisie Wilen makes it the "first-ever all-holographic fashion show".

"I wanted to delve into what could prompt the viewer to question their reality," co-founder Maisie Schloss told Vogue. "The clothes have optical illusions, and we use a lot of textiles with visual effects." 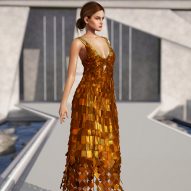 The holograms were created in collaboration with Yahoo using the web company's volumetric video technology, which involved surrounding each of the models with 106 separate cameras and capturing them in ultra-high 6K resolution from all directions at the same time.

Unlike in 360-degree videos, where multiple cameras face outward from a central rig to capture a flat image of their surroundings, this footage helps to create a kind of 3D model that can then be projected onto a wall to create the impression of a real, larger-than-life person.

For those unable to attend the show, a dedicated website houses all of the 3D models and allows users to place them into their surrounding environment using augmented reality (AR).

"You get to zoom in on them, beam them into your space to walk around them," Schloss told Vogue. "It's a level of engagement that we haven't had with the live show previously."

Fashion has long toyed with holograms, from Alexander McQueen projecting a dancing Kate Moss into his autumn/winter 2006 show to Diesel floating giant aquatic creatures over its runway.

In the last year, brands from Gucci to Balenciaga have moved beyond just virtual set dressing to creating entire virtual garments, which can only be worn in AR or in the growing network of virtual worlds known as the metaverse.

Elsewhere at New York Fashion Week, designer Jonathan Simkhai presented his latest collection in the online world of Second Life this month and made the clothes available as virtual wearables for players to purchase before ever showing their physical counterparts.

All imagery is courtesy of Yahoo.