The British Council has announced that the British Pavilion at the Venice Architecture Biennale in 2023 will be curated by Jayden Ali, Meneesha Kellay Joseph Henry and Sumitra Upham.

"Our exhibition will explore architecture of the diaspora through a pre-colonial lens, celebrating the spectrum of architectural philosophies, making practices and material knowledge within those communities," said the curation team.

"Foregrounding their currency at a time of growing social polarisation and ecological degradation, we intend to amplify voices and perspectives that have been previously overlooked in British architecture."

Pavilion "will readdress the architectural canon"

The group will curate the exhibition for the 2023 biennale occupying the British Pavilion – a building in the Giardini built in 1909 which evokes an Italian-style English country house.

They will collaborate with numerous architects and reseachers to create an exhibition that represents many voices. Currently, the exhibition is untitled.

"Our pavilion will readdress the architectural canon through a joyful celebration of pluralism," added the curation team. 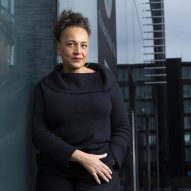 The Venice Architecture Biennale is the most significant global architecture event. Earlier this year Scottish-Ghanaian architect and academic Lesley Lokko was named as its first Black curator.

In 2018 architecture studio Caruso St John and artist Marcus Taylor installed a huge platform on top of the pavilion, while the 2016 pavilion was named Home Economics and curated by Jack Self, Shumi Bose and Finn Williams.