A former hosiery factory in Nashville has been converted into a Soho House hotel and members' club, designed with nods to its industrial setting and the city's musical heritage.

The launch of Soho House Nashville earlier this week marks the company's second location in the American South, following the opening of the Austin house in 2021.

The May Hosiery Building, constructed in the early 1900s in the Tennessee city's artsy Wedgewood-Houston neighbourhood, now contains a series of club spaces and accommodation.

The Soho House design team used the building's industrial past and Nashville's reputation as the Music City to inform the renovation and decor.

"The house design is influenced by a strong pre-war, European aesthetic, connecting to the building's history with Bauhaus-inspired, striking geometric patterns, bold industrial finishes, and bespoke fixtures," said the team.

Playing on the colour of original verdigris copper doors, various teal shades were used across the different spaces to visually tie them together.

Meanwhile, the striped tiling around the swimming pool evokes the pattern of a guitar string board.

"Music City influences do not escape Soho House Nashville with its warm, rich textures of the rock and roll era and decorative patterns that nod to the jazz and blues genres," the design team said.

The building contains three indoor and outdoor performance spaces, a pool, a health club and a screening room.

Food is offered at Club Cecconi's, the first in-house restaurant of the Cecconi's chain of Italian eateries owned by the Soho House group.

At the heart of the building, the Club Room is divided by industrial metal shelving into intimate spaces including a library with a fireplace and a games area.

The Sock Room also celebrates the factory's prior use for producing socks that astronauts wore to the moon, and now hosts live music and events. 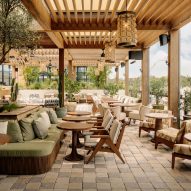 Referencing the machinery once housed in the space, bespoke bar lamps with an industrial aesthetic contrast softer materials like velvet and textured sheer linen.

Soho House Nashville has 47 bedrooms that range in size, including a large loft suite that spans over three floors.

The rooms are furnished with bespoke, locally made designs and vintage accessories, as well as large chandeliers and metal screens that conceal the bathrooms.

"Each bedroom has been designed to feel traditional and cosy with woven tapestries, made with bespoke fabric designed in Nashville specifically for the house, to hide all TVs," said the team.

A total of 170 pieces were acquired from 41 local artists to be displayed throughout the hotel and club areas.

They join the wider art collection exhibited in the Soho House locations across the globe, which the company has gradually added to its portfolio since its founding in London in 1995.

Along with Austin, the group's outposts in North America include Soho Warehouse in Downtown Los Angeles and Dumbo House in Brooklyn.

It's not surprising that the brand chose to open in Nashville – one of several southern US cities that has seen a recent influx of young creative people, and therefore an expanded repertoire of cultural and entertainment venues.

Also new to the city's dining and drinking scene is The Twelve Thirty Club , which is owned by restauranteur Sam Fox and musician Justin Timberlake.

The photography is by Andrew Joseph Woomer.