Chyzhevsky called for the UIA – a non-governmental body that represents global architects in over 100 countries – to "strongly and unequivocally condemn the criminal actions of the Russian government" following the country's invasion of Ukraine, which began last week.

Yesterday UIA expressed its "unwavering solidarity with all those affected" in a statement, but Chyzhevsky called for the organisation to go further and expel the Union of Architects of Russia from the international organisation.

"Those who do not condemn Russia's actions support them," said Chyzhevsky. "They support a crime against all mankind, incompatible with UIA's humanitarian goals."

"We are convinced that the UIA must decide on Russia's membership," he continued. "If we turn a blind eye to their passive position, we will also side with the enemy, with the destruction of human values." 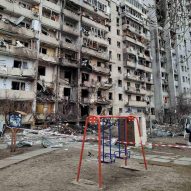 The National Union of Architects of Ukraine also called on the national architecture institutions of Russia and Belarus to condemn the invasion.

"In addition, the silent and passive position of the Unions of Architects of Russia and Belarus shows their support for the deadly war against humanity," said Chyzhevsky.

Russian forces began the invasion of Ukraine on 24 February. In the wake of the invasion architects and designers were forecd to close studios, suspend projects and flee their country.

A growing number of individuals and institutions are showing support for Ukraine, including fashion designer Giorgio Armani who held his catwalk show at Milan Fashion Week in silence in solidarity with the country.