The organisation of this home in Arizona's Sonoran Desert was inspired by a rock formation that architecture firm The Ranch Mine noticed during a site visit early in the design process.

The project is located on an arid site north of Scottsdale. Phoenix-based firm The Ranch Mine drew influence from the site's rocky topography while designing the house, lending it the nickname Boulders.

"When studying the site before starting the design of the house, The Ranch Mine came across three very large boulders, stacked in a way that created a protected and shaded area, a respite from the desert sun for the local fauna," said the architects.

"Simple, functional and at the same time powerful in form, this outcrop became the inspiration for the house," they added.

Each of the home's two bedrooms is located in a separate volume at either end of the 2,400-square-foot (223 square metres) residence. These support a long cantilevered roof that forms the main living area, which includes the kitchen and dining room.

"The large, cantilevered roof features openings that provide extra diffused light into the patio area while allowing hot air to rise and escape through," said The Ranch Mine.

The longitudinal living space is lit by clerestory windows above the kitchen on one side, and by full-height sliding glass doors on the other.

The doors open out to a swimming pool, which is located in the open space formed by the L-shaped configuration of the home. 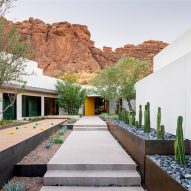 "The bedroom wings are rotated at 90 degrees from each other, creating and L-shaped plan that forms a courtyard for outdoor living and defines two distinct views," said The Ranch Mine.

"The short view looks at Lone Mountain, about 1,000 feet away to the base of the mountain across the desert terrain," they added. "The long view looks towards the mountains a few miles to the northwest, in the small town of Cave Creek."

The architects also included a yoga room and outdoor shower with easy access to the pool. The curved walls of this volume contrast the lines of the rest of the rectilinear home.

The interiors have a neutral palette of grey tones, with concrete flooring running throughout and wooden ceilings that add some depth to the space.

The Ranch Mine was founded in 2010 by husband-and-wife duo Cavin and Claire Costello. The firm recently completed a board-formed home for a ceramicist, and a backyard guest house that is entered via a large pivoting glass door.

Other desert homes in the US include a residence in Utah made with weathering steel and concrete blocks, and a detached guest suite that can serve as an accessory dwelling unit for a family that relocated to rural Texas from Tennessee.

The photography is by Roehner + Ryan.

More from The Ranch Mine