Dutch practice Kaan Architecten has completed the new Geo and Environmental Centre (GUZ) in Tübingen, Germany, informed by the appearance of a block of stone.

The centre forms part of a wider scheme by Harris + Kurrle Architekten to extend the 1960s Morgenstelle Campus of the University of Tübungen, stimulating connection and exchange between previously disparate departments.

Following an international competition, Kaan Architecten was appointed to design the GUZ building, which combines teaching areas and offices with workspaces and labs for the university's Earth Sciences Faculty and Institute of Groundwater.

Informed by the geological work taking place within the building, the practice conceived the form as a glass cube wrapped in bands of stone and concrete, appearing solid from a distance but more transparent up close.

"Seen from afar, the building is like a block of stone with deep ridges that expose a glazed volume," explained the practice.

"The seemingly solid bands are actually hollow structures clad in prefabricated concrete elements and gratings, enabling access to ventilation and maintenance," it continued

Responding to the need for both public learning space and private laboratory areas, the six-storey, rectilinear building is designed around two internal paved courtyards, separating spaces while still allowing for visual connections.

"Conveniently located communal facilities like the auditorium and seminar rooms in the north are easily reached from the campus square," said the practice. "Meanwhile, the labs and workshops face east, with offices lining the west and south." 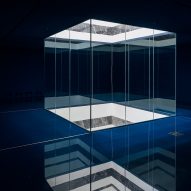 Visitors enter the public, northern side of the building via a double-height reception area. Here, a sculptural spiral staircase connects the six storeys and glazed walls give views through to the teaching areas.

What appear to be regular concrete columns in this foyer are actually sculptural works by the local artist Martin Bruno Schmid, which have been sliced lengthways to create a narrow gap thought their centre.

"A vertical slit through the seven and a half meter high columns reveals their interior, challenging the limits of the structure's load-bearing capacity," said the practice.

On each level, long internal corridors line the edges of the courtyards, providing access to classrooms, meeting spaces and offices to the north, west and south sides of the centre.

At the eastern end, two compact blocks house the laboratories, which are distributed vertically across the six storeys in order of "coarse to fine", with rock preparation taking place on the lower levels and cleanrooms located at the top.

Materials informed by geology continue through the interiors, where exposed concrete, dark walnut and pale leather bring a warmth to the spaces.

Kaan Architecten is a Netherlands-based practice that is led by Kees Kan, Vincen Panhuysen and Dikkie Scipio.

Other recent projects by the practice include a minimalist extension concealed within a wing of the existing 19th-century Royal Museum of Fine Arts in Antwerp.

The photography is by Brigida Gonzalez.