Bangladeshi architect Marina Tabassum, who was recently awarded the Soane Medal, explains why she only works in her home country in this exclusive interview.

Tabassum is known for designing buildings that use local materials and aim to improve the lives of low-income people in Bangladesh, where all her projects are based.

"The reason I've never really worked outside Bangladesh is the fact that wherever I work, I must understand that place, it is very important to me," Tabassum told Dezeen in a video call from her studio in Dhaka.

"To go somewhere and build something without having the full knowledge of it makes me quite uncomfortable," she added.

As Tabassum feels the need to have a connection to the spaces she designs, she doesn't see any reason to create buildings outside of her home country.

"We have so much to do in Bangladesh, we have a lot of work that's there," she said. "I really do not feel the need to go anywhere else to look for work – we all have our own places to concentrate on."

"In a lifetime there's only so much you can do, so staying focused is probably more important," she continued.

Among her designs in Bangladesh are the country's Museum of Independence and the adjacent Independence Monument, as well as the Aga Khan Award-winning Bait Ur Rouf Mosque.

Architecture is a "social responsibility"

Tabassum grew up in Dhaka, Bangladesh, where she established her studio Marina Tabassum Architects (MTA), which she has led for the past 17 years.

Her childhood in the country has influenced her practice, with a number of her studio's projects aiming to create better homes and lives for people in Bangladesh, which has a high income inequality.

"I come from a country where I've grown up seeing this disparity between the rich and poor, and every single day when I get out of my house, you see this disparity," said Tabassum.

"I don't know about architects in other countries and how they should be doing it, but in my case, I encourage the younger generation of architects to come and work for the people who have no knowledge about architecture," she said.

"I think it's a social responsibility for us, especially in Bangladesh, where we can make our knowledge and our skills available to people which can really help better people's lives and living environment."

With her architecture, Tabassum aims to create appropriate buildings with "a sense of place", something she believes has been lost as architecture has become more homogenous over the past 30 years.

"Every place has a uniqueness that through an evolutionary process has come to a point where it's the geography, the climate, the history, everything comes together and creates something which is very essential of a place," Tabassum said.

"I think especially during the very high-flying capitalist time in the 1990s, and even in the 1980s, where we were just building profusely all over the world in this capitalist endeavour, we lost that idea of uniqueness," she added.

"We are losing the value of the uniqueness of a place"

Tabassum studied at the Bangladesh University of Engineering and Technology, at a school set up by the Texas A&M University, and graduated in the mid-90s – a time when, according to her, architecture was becoming increasingly homogenous.

"When I graduated from architecture in Dhaka, I saw the same thing," she said. "It's just stacks of floors, built very quickly – you just put glass on [buildings], everything is about aluminium and glass and that's it, the building is done. "

"It had no sense of the place and if you see the cities that were growing up during that time in China, or in the UAEs and the Arabian Peninsula, everything echoes that idea of globalisation, where everything is kind of standardised, fast-breed buildings," she added.

"To me, that really felt like we are losing the value of the uniqueness of a place."

Instead, Tabassum aimed to find her own voice by designing using local materials. Many of her projects, including the Bait Ur Rouf Mosque, are constructed from brick – a common material in Bangladesh.

"I have tended to work with brick because it works with the climate, it ages very gracefully, in my opinion," the architect said.

"Instead of let's say concrete, which is not that great and especially in our weather – we have so much rain that within a few years the concrete ages quite poorly. But brick ages quite beautifully."

"Glass is not able to take enormous heat"

As architecture has become more global, she believes that buildings have also become less adapted to local climates.

"We've always focused on the idea that the building must be climatically appropriate, so that it's not dependent on any kind of artificial means, like air conditioning, only," she said.

"Which you don't see anymore when you have glass buildings because glass is not able to take enormous heat – it just turns into a greenhouse," she added.

"That's what's wrong with the kind of architecture where you take something from a cold country and bring it to a warm country like ours."

Among the projects that Tabassum designed specifically for the Bangladeshi climate is Khudi Bari, modular houses that can be moved to help communities survive in Bangladesh's "waterscape," which is increasingly affected by flooding exacerbated by climate change.

"Khudi in Bengali means tiny and Bari is house, so these are really modular houses, especially for the landless," Tabassum explained.

"Bangladesh is all about water – it's a waterscape rather than landscape, there are so many different varieties of water bodies." 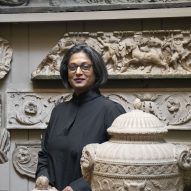 There are essentially two types of people affected by the flooding in Bangladesh, according to the architect – people whose land is periodically flooded during the rainy season, and people who are continuously on the move because the land is constantly shifting.

The Khudi Bari houses were designed to be of use to both groups.

"Each one is quite different so we're trying to give them different solutions to these kinds of houses," Tabassum said.

"We deliver a modular structure which has two levels, so if you have flooding you can move yourself to the upper deck and save yourself and when the water recedes you can start living your life," she added.

"When you have to move, this is a lightweight flatpack system that you can take down and it's very low-cost, it's about £300 all together."

The homes are built from bamboo and steel in order to make it as easy as possible for people to be able to source the materials and build the houses themselves.

Tabassum hopes to eventually be able to train steelworkers locally to make the steel joints needed for the building, which are currently supplied by the architects.

"We would like to make it in a way so that any steelworker in any location can make it," Tabassum said.

"But the rest of the material people source on their own so they can decide how big their house will be and what accessories it will have – there's a sense of ownership about it, which is important."

As well as designing homes for those who have become displaced by flooding – a problem that is likely to increase as the climate crisis continues – Tabassum is also creating architecture for people who have been displaced from their country of origin.

Her studio is working with the World Food Programme to build food distribution centres in Bangladesh's Cox's Bazar refugee camps, which house Rohingya refugees from Myanmar.

Designing for the camps, where nearly one million people live, comes with its own unique difficulties and limitations.

"You cannot build anything beautiful," she added. "So being an architect, you deal with beauty and aesthetics in many ways – it's what we have been taught."

"And now to go against that and design something that is so-called not-beautiful is a challenge, you have to work around that, you need to understand the definition of beauty – what is beauty?"

To create beautiful and practical temporary buildings the studio worked with bamboo, rather than more permanent materials.

"You have a very limited palette of materials but you try to create something out of that," Tabassum said. 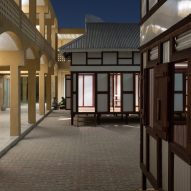 As Tabassum continues working on both her studio's regular projects – it is currently designing a hospital on the outskirts of Dhaka – and its designs for displaced people, she feels that people are at last taking action to help mitigate the climate crisis.

But above all, she believes there now needs to be a focus on collaboration.

"I think it's important to understand that we're living on one single planet, and the north and south are connected in every single way," she said.

"And the majority of the population of the world lives in the Global South. And so it is an enormous responsibility of the north and the south, equally, to come towards a resolution where it is about mitigating our existential crisis."

The main photograph is by Barry MacDonald.