Two concrete volumes linked by a glazed corridor form this family home that Spanish architects Marià Castelló and José Antonio Molina have embedded in a rocky site overlooking the sea in Costa Brava.

Located in the small Spanish town of Port de la Selva, the dwelling is designed to form a part of its steep, sloping site that leads down to the seafront and is characterised by outcrops of dark volcanic rock.

Looking to strike a balance between openness and privacy, Castelló and Molina combined a lower level dug into the site with projecting volumes that look out towards the sea.

This layout also helps to minimise the visual impact of the dwelling and creates a series of patios with varying light conditions.

"While on the lower level, almost at street level, more intimate relationships with the outside are established through patios, on the upper level the two volumes open frontally to the landscape and the sea horizon," explained Castelló and Molina.

"This combination of strategies – embedding in the ground and volumetric division – makes it possible to reduce the apparent volume of the intervention and improve its integration into the landscape."

On the ground floor, a large main bedroom sits alongside a bathroom and living space that open onto private patios framed by steep areas of rock.

Above, the house's eastern volume contains the children's bedrooms and a small swimming pool, while the western volume has a kitchen and dining space next to an additional sleeping area.

Between the two volumes is a glazed corridor with views out to sea on one side and a small courtyard sheltered by the slope of the site on the other.

"The glass nexus, which connects the two bodies and contains the vertical communication, generates an exterior space sheltered from the wind but visually permeable towards the sea," said the architects. 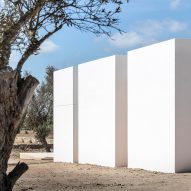 The concrete finish of the exterior was chosen to reflect the nature of the site, with gravel from the excavated rock used to finish the building's roof.

Internally, the white walls of the rooms are warmed by oak detailing and custom-made wooden furniture.

"To compensate for the intrinsic qualities of concrete, oak wood has been chosen to materialise the exterior carpentry, some cladding and custom-made furniture, providing the whole with warmth and harmony," the architects continued.

Both Castelló and Molina are directors of their own practices, named Marià Castletto Architecture and José Antonio Molina Saiz respectively.

Other projects by Marià Castelló Architecture featured on Dezeen include a geometric home on Formentera composed of three white volumes and an Ibizan retreat linked by glass corridors, open patios and a pool.

The photography is by Castelló.