"We deplore the Russian invasion of Ukraine and as a result, we have stopped work on all our projects in Russia," said Foster + Partners' founder Norman Foster.

The studio, which is the largest in the UK, was engaged in two projects in the country. Its withdrawal follows fellow UK studios David Chipperfield Architects and Zaha Hadid Architects' suspension of work in Russia last week.

Invasion "against every value we hold"

Swiss studio Herzog & de Meuron also announced that it would stop working in Russia in the wake of its invasion of Ukraine, which began on 24 February.

"The invasion of Ukraine and the violent actions of Putin and the Russian government are against every value we hold as an international, collaborative practice," said the studio.

"Therefore, Herzog & de Meuron has decided to suspend our work on Russian projects."

Herzog & de Meuron is working on a number of projects in Russia including two apartment blocks on stilts, designed as part of the redevelopment of an abandoned brewery in Moscow.

The Swiss studio has joined a growing number of architects, designers and cultural institutions in expressing solidarity with Ukraine.

"We stand in solidarity with the people of Ukraine as well as the citizens of Russia who reject this violent takeover," said the studio.

"As a company and community of over 40 different nationalities, our concern lies with both our Ukrainian and Russian colleagues whom we support through this unprecedented crisis," it continued. "We remain hopeful that peace can be restored to this region as soon as possible." 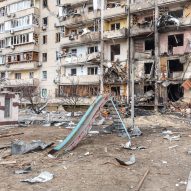