Part W will be crowdsourcing suggestions to add to Women's Work: London over the next month, with the physical map set to be released later this year.

The group launched the map project to help draw attention to the numerous buildings designed and created by women in the city.

"For too long the work of women in design has been undervalued and the contribution of women has not been accounted for in mapping studies, written texts and in studies that promote role model examples of who designs our cities," said Part W founder Zoë Berman.

"We aim to draw attention to built projects by women that have not gained the recognition they deserve," she told Dezeen.

The project will build on a map highlighting 20 buildings in London created by women, which was made for the How We Live Now: Reimagining Spaces with Matrix Feminist Design Co-operative exhibition at the Barbican last year.

Part W hopes that the expanded map will be the first of many created to highlight women-led projects across the UK.

"This map continues work we've already begun recording built projects by diverse women in London – our aspiration is to achieve funding and support from others that allow Part W to expand this work UK-wide and beyond," explained Berman. 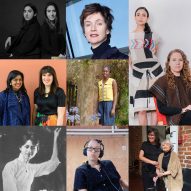 Twenty-two women architects and designers you should know

The map was designed to encourage individuals, school groups and higher education groups to explore the city and discuss its architecture.

"The final crowdsourced map will be an opportunity to get outside, go and visit these spaces in person and learn more about how women have shaped the city around us," said Part W chair Alice Brownfield.

"The map will highlight lesser-known stories of women's significant contribution to the city around us, and spark conversations about who is (and is not) involved, represented and recognised in the production of our built environment."

Part W was founded by Berman of London-based Studio Berman in 2019 when it crowdsourced suggestions to create an all-female alternative to the RIBA Royal Gold Medal winners list.