Mexican studio RED Arquitectos has created a screen-wrapped house made almost entirely out of wood from coconut palm trees, which was designed to blend into its surroundings on a small island off the Yucatán Peninsula.

Located on Holbox Island in the Mexican state of Quintana Roo, Casa Numa is a 160-square-metre home that the client will use as a summer house and vacation rental.

The structure is notable for being entirely made from coconut-palm wood – a material that despite being naturally abundant in the area is rarely used for housing, RED Arquitectos founder Susana López González told Dezeen.

"In Quintana Roo and [nearby state] Tabasco, there is an abundance of coconut palms," López González said. "Some are thrown away by hurricanes and also because they have a short natural life, getting old quickly."

She said the wood was not available industrially and could only be sourced through the artisans who use it in their practice, despite Mexico being one of the world's top coconut palm tree-growing nations.

"In the southeast of Mexico, traditional housing was based on coconut palm," she said. "Unfortunately it was lost, causing the lack of awareness of this integral construction system."

With Casa Numa, López González aimed to use the coconut-palm wood to create a "visually striking" sculptural object that would be integrated into the island through its materiality.

The two-storey house is wrapped with a lattice-like wall of vertical timber slats, which allows partial glimpses into the house during the day and creates a lantern-like play of light at night.

While coconut-palm timber from the mainland forms the structure and walls, a harder wood, from the island's zapote trees, features in the house's pilings and stairs.

Inside, there is a dining room, bathroom, master bedroom, terrace and pool on the first level, and a further two bedrooms, a bathroom, and terrace on the top floor. They are joined by an exterior staircase.

The interior is finished using chukum, an ancient Mayan stucco technique created with the bark of the native chukum tree, as well as white sand aggregate from the site. 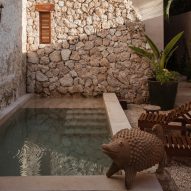 The use of these materials and the avoidance of paint and ceramics helped to reduce the building's carbon footprint.

Casa Numa took six months to build, inside and out, which RED Arquitectos estimates is less than half the time for a house of the same size made with a traditional construction system.

To be readied for construction, the coconut-palm wood was treated with a water-based acrylic sealant to prevent dehydration, and will need to be retreated at minimum every six months. The treatment is also a fire retardant.

RED Arquitectos expects Casa Numa to have a lifespan of 60 to 80 years and to leave a minimal carbon footprint.

López González said she hoped that Casa Numa would provide a template for future building on Holbox Island, which has a delicate mangrove ecosystem that has been damaged by commercial construction.

"Casa Numa seeks to be an example that with common palm it is possible to generate architecture, employment and the use of a raw material that is available to everyone," she said.

"We hope that this construction system could be used in the region for the construction of comfortable, decent, environmentally friendly and low-cost housing."

López González founded RED Arquitectos in 2010, and has a masters in Sustainable Design and Development for the City from the Instituto Tecnológico de Estudios Superiores de Monterrey.

Another recent project from the studio was Casa Calafia, a grand holiday home with arched doorways and windows on the Baja peninsula.

The photography is by Miguel Calanchini unless otherwise stated.