Cities are the only sustainable way to house Earth's growing population – but the importance of protecting them from climate risks has been "totally underrated", according to Hélène Chartier of sustainable urbanism network C40 Cities.

"In terms of reducing emissions, living in cities is the best option we have," said Chartier, who is head of zero-carbon development at C40 Cities.

Chartier spoke to Dezeen following the publication of the latest climate report from the UN's Intergovernmental Panel on Climate Change (IPCC).

The report shows that cities are key players in the fight against global warming, Chartier said. In the countryside, people are reliant on cars and live in larger buildings that are less efficient to heat and power, she explained.

Urban areas, on the other hand, offer an opportunity to service large swathes of the population with decarbonised public transport, cycling routes and sustainable energy, waste and water management systems.

"We know that to have a more sustainable lifestyle, we need to have access to the right infrastructure," she told Dezeen. "And this is not viable outside cities, let's be honest."

"To develop this kind of infrastructure and make it efficient, you need a certain level of density."

"Architects have a huge responsibility"

The IPPC's latest report found that cities have failed to prepare for the impacts of climate change that are already touching every region of the world – not to mention the more frequent and severe heatwaves, floods, droughts and storms that are to come as temperatures continue to rise.

To fulfil their full climate potential, Chartier said cities will first need to be decarbonised and become greener, more compact and more resilient to the disastrous impacts of global warming.

"In the past, the focus of climate action was mainly on mitigation," she explained. "It is now urgent to also act on adaptation, as the effects of climate change are already here and will amplify quickly."

Currently, cities house 55 per cent of the global population while being responsible for 60 per cent of emissions. Unless urban areas are fundamentally redesigned, Chartier said this is only set to get worse as the number of people living in cities is set to increase to almost 70 per cent by 2050.

"The report really insists on the fact that poorly planned cities and urban growth have a very significant impact on global warming," she said.

Buildings account for around half of a city's carbon footprint, so the solution is to eliminate operational emissions from heating and energy use as well as embodied emissions from materials and construction.

"Architects have a huge responsibility," Chartier said. "The way we design our building today is going to change the world tomorrow."

C40 Cities aims to encourage a shift to low-carbon cities through projects such as the Reinventing Cities competition, which will see 49 experimental developments built in 19 different cities.

The initiative forms part of C40 Cities' wider mission to help its members, including almost 100 of the world's biggest cities, reach their net-zero goals.

Outside of buildings, the majority of an average city's emissions are down to road transport. So Chartier suggests that local governments should enforce growth boundaries to reduce travel distances and limit urban sprawl. 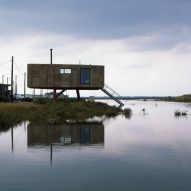 Cities should also become more polycentric, so they contain self-sufficient 15-minute neighbourhoods where all daily necessities are accessible via a short walk or cycle.

This would make space to regenerate and protect forests and other ecosystems in and around cities so they can act as carbon sinks.

"We need to ban all construction that will kill or destroy nature," Chartier said.

All buildings must have climate change risk assessment

As urban areas become denser, they will become increasingly vulnerable to the disastrous impacts of climate change due to their growing populations and the urban heat island effect.

To mitigate this, Chartier said all building projects or urban developments should now start with a climate change risk assessment, looking at the hazards that a site will be exposed to under different emissions scenarios over the coming decades.

"That's really something that has been totally underrated," she explained. "A lot of cities haven't actually assessed in detail where there is a risk."

Construction in vulnerable areas such as flood plains and coastal shores should be banned or limited, Chartier said. And any new buildings should incorporate greenery as well as passive cooling and bioclimatic design strategies to protect inhabitants from heatwaves without the need for air conditioning.

Nature-based solutions such as green roofs, greenways and belts are particularly effective, as they can both absorb rainwater and lower local temperatures.

"Allocating land-use for green spaces and permeable soil needs to be compulsory for every new project," Chartier said. "There can even be local bylaws to ensure that all roofs or walls over a certain size integrate a certain percentage of green area, which New York is considering."

Dezeen recently rounded up a number of existing projects that incorporate climate resilience strategies, including a floating villa with retractable stilts and a house in Vietnam that accomodates seven people and 120 trees.

Another key way that architects can help to fight climate change is by considering the consumption-based emissions generated by the people living in their buildings, as Chartier outlined during a talk hosted by Dezeen at Dutch Design Week last autumn.