Over a space of just 300 square metres, including the roof, the family home in the Thai capital of Bangkok accommodates seven people and 120 trees.

To achieve this, the house is segmented into three, blindingly-white volumes that are lined up like dominoes to make space for two courtyards in between and multiple green roofs on top.

"The architectural layout of the house is designed to maximise natural ventilation and sunlight," explained Shma Company's director Prapan Napawongdee.

"And the interplay between solids and voids, which is present throughout the three storeys, brings the greenery close to every room in the house."

Rather than choosing plants simply for their aesthetic appeal, Shma Company drew on its expertise in landscape design to create a miniature, biodiverse ecosystem that can provide a sanctuary for local wildlife. 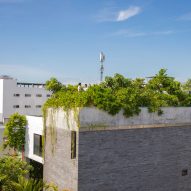 This includes not just flowering trees but also evergreens, that will envelop the house in a verdant canopy all year round.

The roof, which receives the most direct sunlight, is outfitted with tall planters for growing Thai fruits, vegetables and herbs such as lemongrass and jackfruit, to provide food security for the family.

"Selecting a variety of tree species can mimic the conditions of a forest in nature," said Napawongdee.

"Different trees will extract different nutrients from the soil. And their fallen leaves, which act as a natural fertiliser will, in turn, return a full spectrum of nutrients back to the soil.

"By having a great number of the trees planted side by side, the water that evaporates from each tree will maintain an optimum level of humidity within the ecosystem even during the dry season," he continued.

This self-fertilising ecosystem is maintained via a drip irrigation system – a network of perforated tubes integrated into the top layer of soil that drip feeds the roots directly and requires less water than a splatter gun approach such as sprinklers.

Rather than using fully-grown trees, Napawongdee selected trees that were only one to two years old, as their young roots would allow them to adapt to the limited soil conditions.

In this way, he hopes to foster a resilient ecosystem for the long term, rather than creating a luscious canopy right away that might not last very long.

White steel louvres cover the street-facing side of the house to create privacy while allowing the owners to keep windows and glass partitions open at night and reduce the need for air-conditioning.

Behind these barriers, narrow balcony spaces fringe the house, which Napawongdee says are essential given the house's tropical setting.

"It's important to have an overhanging roof to reduce the chance of rain getting into the room during monsoon season," explained Napawongdee.

"In each room, the balcony fulfils a different function depending on the owner. In the master bedroom, for example, it is filled with a variety of potted plants, which thrive really well in this microclimate."

Napawongdee believes that plant-covered buildings can help to mitigate many of the effects of climate change, which Bangkok is already experiencing.

This includes not just flooding and rising temperatures but also the third-worst air quality of any city in the world.

"Although people generally agree on these benefits, many wouldn't want to integrate it into their house because they fear the long term maintenance. So our experiment with this house was to find a sustainable way to integrate greenery throughout multiple levels while creating a simple way of caring for it."

According to Napawongdee, Forest House alone creates enough oxygen in a day to supply 240 people. Adopted at scale, this type of architecture could help to keep our cities habitable in the future.

"If we could live in a city where nature thrives alongside urban developments, it would be a good place to live. Greenery can improve our wellbeing in many ways and also protect our planet's biodiversity and other species in the long run," he said.

Forest House has been shortlisted in the urban house category of this year's Dezeen Awards.

Several other projects nominated in the category focus on bringing nature close to city dwellers, including Thang House and Sky House in Vietnam, as well as Daita2019 in Tokyo, which is connected to its garden through permanent scaffolding.