The project was led by and designed for Bram Van Cauter, founding partner of Studio Okami Architecten, who lives there with his partner, art collector Doris Vanistendael.

Riverside Tower is a 20-storey apartment building positioned in the bend of the river Scheldt, completed by architects Leon Stynen & Paul De Meyer in the 1970s.

The 230-square-metre apartment is on the thirteenth and fourteenth floors of the building, three storeys above the Studio Okami Architecten office. The couple also owns a duplex in the same building, which contains a guest suite and Vanistendael's art gallery named Soon.

Studio Okami Architecten's first step of the renovation was to tear down the walls of the apartment and strip away all the surface coverings.

While revealing the concrete structure of the apartment, this transformed its layout from a five-bedroom dwelling to a lofty open-plan space with a single bedroom.

"With the Riverside Tower being a brutalist building, it seemed logical to strip the apartment to the bare concrete, showing the space in its most honest and raw form," Van Cauter told Dezeen.

"Removing the walls allows for unobstructed views over the city," the architect added. "Being childfree, an open-plan space was a logical choice."

A few brick walls in the dwelling were retained but covered with cement mixed with small stones, creating a finish that matches the original concrete structure.

To counterbalance the rough concrete surfaces, a peach-hued resin floor has been added alongside plants and artworks hung from existing holes in the concrete.

"The aim was to balance out the rough concrete by adding colourful elements to the space," Van Cauter explained. "The artworks, furniture and plants all combine to create a homey atmosphere."

Double-height pivoting windows also brighten the space by providing natural light and views out over the river and a neighbouring forest.

On the lower floor of the apartment is an open-plan kitchen and dining area. Above it is the living room, bedroom and home office.

The apartment's upper level, which is intended to feel more secluded than the floor below, is arranged around a technical block containing the bathroom, storage and utility facilities.

"The duplex setup creates a special division between the downstairs entertainment area and the more private upstairs functions like a home office, living and bedroom," Van Cauter explained.

Linking the two levels is a pastel blue spiral staircase, chosen to stand out against the concrete. It was welded and painted in place due to the limited size of the tower's circulation areas. 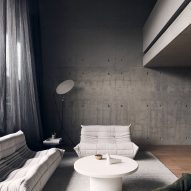 The pastel colour palette continues in the bathroom, which is lined with smooth peach pink surfaces.

These surfaces ensure the bathroom is watertight, but they also create a sharp contrast with the rough concrete beams overhead.

Studio Okami Architecten chose a mixture of contemporary and vintage furnishings to complete the apartment. Among the classic furniture are the patchwork De Sede DS88 sofa and Rietveld Crate Chairs, while contemporary pieces include a Long Table by Muller Van Severen and a red Bold chair by Big-Game.

There are also a series of bespoke elements, including the kitchen island, designed by Studio Okami Architecten to resemble "a sculpture in the room when out of use". This is teamed with cabinetry that references the work of American artist Donald Judd.

Other apartment renovations featured on Dezeen that are located in brutalist buildings include a New York residence by General Assembly in a 1970s tower block and a flat at the Barbican estate in London that Takero Shimazaki Architects infused with Japanese details.

Alongside the Riverside Tower apartment renovation, Studio Okami Architecten also recently completed a brick and concrete home that is embedded into a sloping hillside in Belgium.

The photography is by Olmo Peeters unless stated.