Studio Okami Architecten has dug a brick and concrete home into a sloping hillside, looking out over the valley landscape of Mont-de-l'Enclus in Belgium.

Rather than conform to the strict building regulations of the area, which would have required a pitched roof, local brick and predefined window sizes, Studio Okami Architecten designed what they described as an "invisible house".

Called Sloped Villa, the house's living spaces are hidden under a green roof.

"By using the sloped terrain to hide the project, the city council was convinced to step away from the traditional regulations, allowing the client his dream for infinite views over the valley," said the studio.

Almost imperceptible on approach from the west, the protruding fireplace chimney and slim balustrades are all that declare the home's presence.

Two brick staircases along its northern and southern edges lead down into entrances at either side.

From all other angles, however, the building presents bold brick elevations.

A run of columns creating large openings onto the veranda that surrounds the home.

A glazed curtain walls is set back from the raised, covered brick veranda, which provides outdoor seating for looking out at the landscape.

A large living, kitchen and dining area occupies the majority of the interior, which is organised around a series of structural concrete columns and a central fireplace. 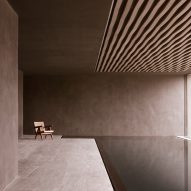 "Everyday living takes place in a loft-like space, with ceiling to floor windows painting the magnificent landscape," said the studio.

Three cave-like bedrooms sit underground at the rear of the plan.

Light and air reaches them via an internal glazed courtyard, which also acts as a small external patio.

The bathroom sits directly off this courtyard.

Looking out into the courtyard, the bath is given privacy by a large potted tree.

Other homes that have been hidden beneath hills include Aires Mateus' project in Portugal covering a home with a cantilevering roof, and a recent project by Niko Architect in Russia that sees a home buried underneath undulating artificial hills.