Klopf Architecture has reconfigured a San Francisco home to create an open-concept living space that faces onto the backyard.

After spending a few years in a spec house and eager to improve their living arrangement, the owners of this San Francisco residence looked to local studio Klopf Architecture to see if they could renovate their current home.

"The clients were able to see beyond the dated materials and finishes," said the studio, and from there they decided to update the entire house.

The primary goal was to create an open layout for the living spaces, in contrast to the existing rooms, which were compartmentalised and dark.

"With raised ceiling heights and large windows and glass sliding doors, the open and airy great room now extends out onto the patio surrounded by lush landscaping to create one even larger indoor-outdoor room," said Klopf Architecture.

The new layout for the home reversed the positions of the kitchen, living, and dining rooms with the bedrooms, lending the project its nickname, Modern Inversion.

The front of the home is closed off to the street. The former bay windows have been replaced with a solid white facade. Conversely, the rear has a large glass sliding door and is clad in weathered wood.

As currently configured, the home is entered up a flight of stairs and directly into a large living space. The sliding glass doors open out onto the elevated backyard. Another flight leads directly to the patio from the street.

"Klopf was able to broaden the openness, continuing on the original architecture to take full advantage of the unobstructed natural light across the rear of the house and convert the area into a much more comfortable and functional indoor-outdoor living space," the owners explained.

The home's two bedrooms now face the street and have some privacy from the rest of the home, since they are stepped down from the living area.

In addition to upgrading finishes, Klopf Architecture was able to raise the ceiling height in the living area, which contributes to the openness. 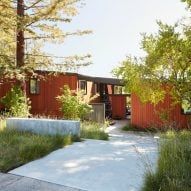 A decorative ceiling made of wooden staves brings warmth to the interiors and matches the new kitchen cabinets as well as the fireplace.

Integrated lighting systems run along the battens that divide the space, "visually connecting while also defining the use areas within the space", said Klopf Architecture.

Architect John Klopf established Klopf Architecture in 2001. Based in San Francisco, the studio has completed work throughout the United States including the renovation of several mid-century homes by Joseph Eichler.

Other San Francisco properties include an apartment building by Woods Bagot that features a five-storey green wall, and a private residence with curvaceous interiors that are meant to resemble clouds.

The photography is by Mariko Reed.