Roz Barr Architects has designed a co-working members' club for London's new design district, featuring a bright red salon, stairs you can sit on, and a workspace that doubles as a dinner table.

Bureau offers a range of co-working and social spaces designed specifically for those working in the creative industries.

It occupies two buildings in the recently opened Greenwich Design District: the concrete-framed D1 designed by Architecture 00 and the ripple-facaded C3 designed by HNNA.

Architect Roz Barr and her London-based team designed a series of playful interiors for Bureau, hoping to create a distinct identity that extends across both buildings.

The buildings' raw structures are left exposed but contrasted by bold flashes of colour, so that spaces feel characterful but open to adaptation. Bureau describes them as "elegantly utilitarian".

"The brief we developed was about offering a home for creatives, which allowed them to bring their own identity to how they occupied the spaces," said Barr.

"A language of elements and materials form a rhythm between both buildings," she told Dezeen.

The C3 spaces were the first to open, as part of the Greenwich Design District's official launch in September.

Occupying four floors, the offer here includes private studios, a mix of fixed and hot-desk workspaces, plus a range of shared facilities that include a restaurant, a lounge, meeting rooms and phone booths.

The recent addition of D1 broadens the variety of space available. Its five floors include both indoor and outdoor workspaces, plus flexible spaces that can be used for a variety of events and group activities.

In both buildings, the ground floor is designed to offer spaces where members can come together and share ideas.

C3's all-red salon can host talks and film screenings, while the restaurant functions as a gathering space.

Meanwhile, D1's ground floor contains a 14-metre-long table that can be used for group collaboration or dining events.

D1 also includes a space known as the forum, a lounge that can also be used for presentations. A staircase-like furniture element made from recycled plastic creates casual tiered seating. 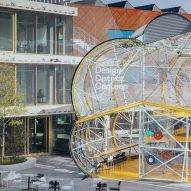 "We understood we were creating a place for the creative industries to work, meet and relax," said Barr.

"Bureau is the centre of design district, so it was seen as a place where members of the community would join and form a sort of collective."

Material finishes throughout the interiors would be more typically be found in industrial workshops than offices, emphasising the creative nature of Bureau's members.

Floors are either bare concrete or covered in colourful marmoleum, while wall finishes include cement boards and corrugated metal, and perforated metal screens function as space dividers.

"We used a palette of materials that worked across both buildings, using metal stud walls that were clad in perforated metal sheets, acoustic felt, and doors and tables clad in furniture linoleum," said Barr.

"This language offers a soft backdrop for users to personalise however they want."

Barr chose contemporary furniture designs to accompany the custom elements, with designs from the likes of Richard Lampert and Philippe Malouin.

With so many external terraces in D1, Hay's Palissade outdoor furniture, designed by Ronan and Erwan Bouroullec, features both inside and out.

"As ever, flexibility is key," added Barr. "For larger events, rugs can be rolled up and furniture moved out onto the terraces."

Greenwich Design District is London's first dedicated design district. Created by developer Knight Dragon, it offers workspace for up to 1,800 people and a range of specialist facilities.

The district includes 16 new buildings, including a transparent bubble-shaped canteen designed by Selgacano and an entrance building by David Kohn Architects with the words "design district" spelled out on the roof.

Since launching in September 2021, 92 per cent of available units have been let and a further two buildings are set to open in the district later this year.

Bureau members have access to other facilities in the design district, including photography studios, post-production suites, a sound studio and a pottery workshop.