German studio Batek Architekten has refurbished Yorck Kino Passage, one of the oldest cinemas in Berlin, adding a foyer bar with pistachio-coloured arches and covering its screening rooms in saturated colours.

The local studio wanted the renovation to pay respect to the original neoclassical style of the 1908 cinema, while still giving it a contemporary feel.

The basic structure of the foyer in the 325-square-metre cinema, which has decorative stucco elements, is the original, as are the staircases and large cinema hall. Other rooms had been renovated and refurbished over the years.

Batek Architekten drew on the building's large arched windows when designing the new foyer bar, which has pistachio-green arches that contrast against the original linoleum floor's reddish-brown colour.

"This led to the general choice of earthy tones, but we chose the pistachio as a surprising addition."

The studio also added a natural cork covering to the cupboards in the foyer, which has a number of practical advantages.

"The natural cork wall cladding was installed for acoustic reasons, it conceals the drinks storage and staff room spaces and allows for the hanging of posters and notices," Batek explained.

In addition, existing materials were reused as part of the renovation. Corten-steel cladding from the cinema's old bar was upcycled and reinstalled as panelling, edging and fitting elements of the new bar. 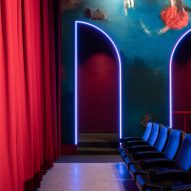 As well as making interventions in the foyer, which now also features seating covered in forest-green and spring-green velvet fabric, Batek Architekten renovated two of the cinema's smaller auditoriums.

Here, the team added intense, deep colours that they felt were suitable for the ambience of the screening rooms, using blue for one and red for the other.

"The auditoriums are in the basement of the building, and we wanted to create a more intimate atmosphere than in the original large lighter-coloured auditorium," Batek said.

"That's why we clad it in dark Prussian blue fabric which contrasts nicely with the warm glow of the yellow-upholstered seating rows."

A more traditional colour was chosen for the second room.

"The other screening room is an interpretation of the classic cinema interior with a range of reds from rust to crimson covering walls and seating alike," Batek explained.

Batek Architekten has a history of designing cinema interiors – having previously completed the Kino Delphi Lux cinema for the same client and refurbished the historic Blauer Stern cinema in Berlin.

Among the studio's other designs in the city is a duplex townhouse comprised of stacked cubes.

The photography is by Marcus Wend.