Chinese studio One Plus Partnership used reflective bronze panels and a variety of spotlights to create a light-and-shadow effect at the Wan Fat Jinyi cinema in Shenzhen, China.

The studio chose "stage lighting" as the theme of the interiors to match the concept of the cinema, which caters to both film screenings and live performances. The project has been shortlisted in the leisure and wellness interiors category of Dezeen Awards 2022.

"This project's core design concept for the cinema was the 'stage'," the studio said. "Since the old days, the stage has served as a space for actors or performers and a focal point – the screen in cinemas – for the audience."

On the lobby ceiling, two lines of spotlights are assembled with the lights pointing outwards at each side to form a series of rectangular blocks. They hang randomly at different angles to make it look as if they are floating above people.

Also in the lobby, One Plus Partnership covered the interiors using bronze as the main material to create more reflective surfaces. The reflective quality of the bronze helps to create a light-and-shadow effect when it is hit by the spotlights.

Yellow and orange were chosen as the main colour palette of the interiors since the colours are closely associated with light.

In the hallway, the spotlights are used as single units and have been added to the floors and walls at different angles. By arranging these lighting dots into groups, the studio created decorative patterns on the all-black walls, highlighting the lighting effect.

Some of the spotlights are formed into signage that help visitors to identify locations and directions. 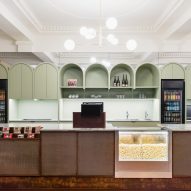 The studio used the same colour palette for the auditorium. The geometric patterns on the walls and seating were designed to resemble traces of light shot from spotlights.

"By using just different combinations of colours, we have managed to give variety to the design with the lowest possible costs," explained One Plus Partnership.

Other Chinese projects in the running to win a the Dezeen Awards 2022 include a second-hand bookshop that uses supermarket-style crates to display its wares and a timber and travertine reading room, both located in Shanghai.