French practice Antonio Virga Architecte has used perforated brickwork and gold metal to wrap a cinema building in Cahors, France, which filters light onto the surrounding public square at night.

Antonio Virga Architecte's aim for the building, named Cinema Le Grand Palais, was to reunite a complex of historic buildings originally used as a convent and then a military base – the east wing of which burned down in 1943.

The project is shortlisted in the civic building category of Dezeen Awards 2021.

"In recent years the space between the buildings, poorly defined, was used as a parking lot," described the Paris-based practice. "With the [cinema], the basis of our project was to find the lost urban city that the site once had or could have," it explained.

"The architecture of the cinema reaches out to old Cahors, to the history of the square and to the lost concept of old monumental movie theatres."

The seven-screen Cinema Le Grand Palais, which also includes a museum space, is designed as a blank, pale brick box.

It is an almost uncanny copy of the surrounding 19th-century blocks, echoing their height and roof shapes but with bold golden doors and no windows.

"It was important to have a timeless architectural expression," explained the studio.

"We wanted something that would connect strongly with the existing – maybe as if it has been there for a long time, avoiding all pastiche or faux vieux [fake old]."

As Cinema Le Grand Palais required more space than the brick building would provide, it is enlarged by a more contemporary volume clad in perforated gold metal. This is intended to appear as a modern extension to the "timeless" brick form.

"We opted for this 'false' extension, a second building in golden metal, a material that again blends well with the colours of Cahors," the studio said. 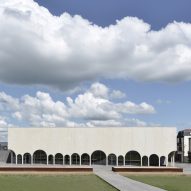 Perforations that reference latticed mashrabiya screens, most commonly found in traditional Islamic architecture, have been created in large areas of the brick facade and cover the metalwork.

During the day these perforations allow light to enter the cinema, while at night they are illuminated from within, revealing their location on the brick facade as a series of rectangular areas that appear to glitter.

"We tried to play with mass and lightness, an idea also expressed through the facades, with their mashrabiya that 'receive' light throughout the day and irradiate by night, making the building lighter," described the practice.

Internally, the brick and metal forms are connected seamlessly, with two cinema screens located on the ground floor and a further five screens above.

A double-height foyer and adjacent cafe space occupy the front of the brick form, accessed via a run of glass doors signaled by a gold-lined cut made in the facade.

Another recently completed cinema on Dezeen includes the renovation of the historic Blauer Stern Cinema in Berlin by Batek Architekten, referencing its original mouldings with neon lights.

Other projects shortlisted in the civic building category for this year's Dezeen Awards include an all-timber school in Denmark and a garden-like preschool in Vietnam.

The photography is by Luc Boegly unless stated.