The American Institute of Architects (AIA) has announced the winners of its annual Housing Awards, including multiple residences by Olson Kundig Architects and Alterstudio.

Fourteen projects were selected by the panel of judges in three categories: one- and two-family custom residences, specialised housing, and excellence in affordable housing.

Two designs by Olson Kundig and three by Texas-based Alterstudio made the cut.

"Specifically, the jury looked at whether designs are sustainable, affordable, durable, innovative, socially impactful, meeting client needs as well as addressing the natural and built contexts," said the AIA in a release.

"Recipients show the world how beauty, safety, sustainability, and comfort can come together," the institute also noted.

Among the one- and two-family custom residences were the two Olson Kundig designs, both of which are not located in the United States: the Costa Rica Treehouse in Santa Teresa and Rio House in Brazil.

The other winning project outside the US was Robert Hutchison and JSA Architect's Rain Harvest Home in Temascaltepec, Mexico. "This design offers a house as a laboratory for water conservation," said a juror.

In Washington DC, Renovation 1662 by Robert M Gurney was selected as the only refurbished project in the custom homes category. The jury said that the home was "[a] near-perfect marriage of history and contemporary, urban living".

Three residences from Texas were selected, all by Austin-based Alterstudio Architecture. These included the studio's Highland Park Residence, the Pemberton Residence in Austin, and the West Campus Residence, also in Austin, with Mell Lawrence Architects.

The Divine House in Oregon by Landry Smith Architect was chosen in part because the studio "envisioned it as a 200-year or more structure".

A project in Atlanta called aMews House is the first ground-up residential design by Alex Wu Architect. "aMews House demonstrates the role of design in transforming an undesirable, restrictive Atlanta lot into a humane and beautiful space," said the AIA about the home, which Wu designed for himself.

In the specialised housing category, which focused on projects that work to alleviate the housing crisis, two projects from Los Angeles were chosen. Chandler Tiny Homes Village For The Homeless, one of several similar projects by Lehrer Architects, won based on "a colorful, energetic assault on homelessness".

The other project in this category was Koning Eizenberg Architecture's Flor 401 Lofts, a project built for Skid Row Housing Trust to serve the unhoused and those dealing with mental health issues. 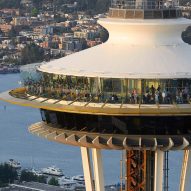 Projects in the affordable housing category included Ohringer Arts in Pittsburgh by Rothschild Doyno Collaborative and The Aya in Washington DC by Studio Twenty Seven Architecture. The latter was chosen because its design "conveys respect for the community and those it serves" and because of a lengthy community engagement project in the drafting phase.

The Housing Award, which has been active for 22 years, is presented by the AIA Housing and Community Development Knowledge Community. See photography of the other winning projects below.

To see more from the AIA, see the winners for this year's general architecture awards. For prizes out of Europe, check out this year's Mies van der Rohe Award 2022 finalists.

The lead photo is of Highland Park Residence by Alterstudio Architecture. The photo is by Casey Dunn.