A board-marked concrete chimney raises this house designed by US architecture firm Olson Kundig to "hover" above its surrounding in the Brazilian rainforest.

Rio House was built for a couple that wanted a secluded retreat after many years of living in Rio de Janeiro.

The 1500-square-foot (139.3-square-metre) house and its surrounding property is on the border of the Tijuca National Park, a tropical rainforest outside of Rio de Janeiro.

Two chunky concrete pillars hoist a horizontal steel volume above the ground raising the structure to the height of the lush rainforest canopy. Its compact form minimises its impact to the natural surroundings.

"The building hovers above the land and is a platform for the owners to appreciate and enjoy the beautiful Rio landscape," said Olson Kundig design principal Tom Kundig.

"The agenda was simple – to make the house as small as possible in the big, beautiful landscape of the Tijuca jungle," he added.

One of the concrete piers doubles as a fireplace that faces the outdoor seating, dining area and kitchenette on the ground level. This statuesque hearth is made from board-marked concrete that gains a streaked texture from the imprint of wood boards.

Concrete flooring on the covered patio is pigmented with red stain, while Brazilian wood planks cover the ceiling.

The raised rectangular volume comprises a marine-grade black steel frame made to withstand the region's humid climate and prevent corrosion.

Large windows across its facade expose the interiors to the surrounding jungle. The south elevation offers views towards the city, ocean and Brazil's famous Christ the Redeemer statue. 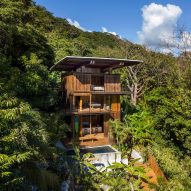 Inside, Olson Kundig has covered terracotta with coloured plaster to form walls, following a traditional building technique in Brazil. In the living room and bedroom, a row of large built-in bookshelves with attached desks span the length of one wall.

The concrete fireplace on the ground floor extends to the upper level where it faces a colourful striped rug and low-lying red couch.

Manual pivot windows and retractable walls operated by a wheel and pulley system act as natural ventilation systems to cool down the house.

Other environmental details added to the house include insect screens to keep bugs out and a solar water heating system.

Kundig's upcoming book showcases the architect's highlights from his career at the firm, He selected 10 of his favourites for Dezeen, which included Rio House.

Other projects by the firm are an expansive house overlooking Hollywood's Sunset Strip and a house in Costa Rica constructed with a number of local materials.