Architecture studio Loader Monteith has renovated a modernist house in the Scottish Borders that was damaged in a fire, using a light touch to reinstate its original design by architect Peter Womersley.

Womersley designed the High Sunderland house in 1957 for internationally renowned textile designers Bernat and Margaret Klein, who lived in it for over 50 years.

The category A-listed house was sold for the first time in 2017, but subsequently suffered extensive structural damage caused by a small fire while undergoing basic repairs.

Its new owners recognised the building's importance and commissioned Glasgow-based Loader Monteith to oversee a renovation project that is sensitive to Womersley's original vision.

The project focused on restoring as many of High Sunderland's original features as possible, while carefully introducing environmentally friendly systems that meet the latest sustainability criteria.

"Our approach for both the restoration of the fire-damaged interior and in developing proposals which required change and adaptation was to be as imperceptible or 'invisible' as possible while maximising the improvement to the fabric and reducing the energy consumption of the house," explained Loader Monteith's conservation specialist Iain King.

"Otherwise, we risked negatively impacting the architectural integrity and significance of the building," King added.

High Sunderland was Womersley's first private residential commission. While raising their family there, the Kleins used the house as a studio and a hub for hosting events including fashion shows and exhibitions.

Similarly to its iconic modernist predecessors such as the Edith Farnsworth House designed by Ludwig Mies van der Rohe, High Sunderland features open-plan living spaces lined with glazing that help to immerse the occupants in its scenic surroundings.

The glazed elevations led the dwelling to be nicknamed The See-Through House. This also became the title of a memoir published by the Kleins' daughter, Shelley, in 2015. 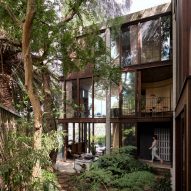 Its glazed exterior bays are separated horizontally by white strips and vertically by a framework made from Makore wood. Clerestory glazing is inserted beneath the white fascia at the eaves.

Internally, High Sunderland is separated into areas for living, bathing and sleeping by laminated-glass panels or walls clad in Makore wood.

The main living space features a sunken floor and much of the furniture was custom-made for the house. The original owners left their mark in the form of tile mosaics at the entrance and various textiles that they made.

Steel roof trusses, insulation and original timber panelling that were destroyed in the fire were reinstated and upgraded to enhance the building envelope's efficiency and thermal performance.

Insulation was added to the house's roof, which also integrates an air-source heat pump in a new timber-clad cube. Underfloor heating was introduced in the lounge area and all lighting and wiring were updated in line with current safety standards.

Matt Loader and Iain Monteith founded Loader Monteith in 2016 and have since completed several conservation projects as well as new buildings including a timber-clad extension in the Scottish Highlands.

High Sunderland was longlisted in the residential rebirth category of Dezeen Awards 2021. The category was won by Tegnestuen Lokal for its transformation of a dilapidated building in Copenhagen into housing.

Other modernist home renovations featured on Dezeen include Fox Johnston's upgrade of the SRG House in suburban Australia and Enclosures Architects' revival of Rudolph Schindler's Manola Court apartments in the US.

The photography is by Dapple Photography.