The Italian label's art director Robert Vattilana designed the interiors of the store, which is located at 8424 Melrose Place in Los Angeles – the first Forte Forte branch in the US.

Vattilana called the design "an ineffable balance of the geometric and the organic".

Two rectilinear shop windows are framed by a sage-green enamelled metal facade with the boutique's glowing logo. The recessed front door is crafted from enamelled wood.

Inside, a bright white ceiling is lit at the edges casting light on the textured walls, which create a neutral backdrop for Vattilana's minimal but eclectic designs.

"The Los Angeles boutique is meant as a concise and vibrant project where light becomes matter, in an ineffable balance of the geometric and the organic," the interior designer told Dezeen.

Both pastel hues and brighter pops of colour are seen in the store's furniture, which ranges from chunky terrazzo planters and gold shelving to a powdery pink chaise longue.

The amount of garments on display is minimal, with single dresses suspended delicately from various squiggly formations of gold wire.

Changing rooms exist within a rounded, bright gold pod that is separated into cubicles. These feature a mixture of plush sea-green textiles and an array of mirrors. 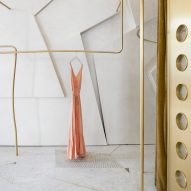 Another standout element is two giant stones placed in front of ethereal, full-height muslin curtains, one of which balances on top of the other in a dramatic formation.

"The stones are from the Palm Springs desert and are meant as a tribute to the work of [former Swiss art duo] Peter Fischli and David Weiss," explained Vattilana.

Back-lit, circular openings throw light on the boutique, which, according to the designer, also take cues from an existing artist.

"Perimeters and ceilings create movement and an iridescent light emerges from the total depth of the shop, referring to the luminous geometries of [light artist] James Turrell," he continued.

Vattilana described the brand's Los Angeles store as a space that "echoes the volumes and lines of Californian modernism," as it follows a group of uniquely designed Forte Forte stores in locations such as Milan and London.

"The contrast with Italian materials and finishes enriches the balance of components with further nuances, sealing the uniqueness of the project."

"Each Forte Forte location follows a different rhythm," he concluded.

Giada Forte and her brother Paolo Forte founded the Italian fashion brand in 2002. Its other store designs include a Tuscan boutique with a hull-style ceiling and a Rome store "drowned" in green onyx.

The images are courtesy of Forte Forte.