Design studio MAWD has redone the interiors of an IM Pei tower in Denver, Colorado, including the lobby and an adjoining Philip Johnson-designed atrium.

The London and US-based interiors studio redesigned aspects of the interiors at the 23-storey commercial tower 1700 Broadway in downtown Denver for Beacon Capital.

MAWD updated the 27,000-square-foot (250-square-metre) lobby and atrium – the latter attached in 1983 by architect Philip Johnson, almost 30 years after the tower's completion.

Rebranded as the Atrium Campus, the extensive redesign of 1700 Broadway – which was the first skyscraper in the city – includes an update to the security desk, a lounge, and updates to the streetscape.

Influenced by the mid-century architecture of the original design, MAWD included a massive communal fireplace with travertine accents. The coherence with the original was achieved through using repurposed stone from other parts of the building.

"We drilled into the mid-century details that were prevalent, authentic and 'of-the-moment'," said Elliot March, design lead on the project.

The designers surrounded the fireplace area with long and short tables for gathering, as well as booths along the walls. Wooden louvres were placed over the welcome desk to highlight the green wall behind it.

The lobby is framed by the black colonnades that define the structure from the street, which open up to the atrium.

Johnson's sloping atrium, which wraps around the lobby, was redesigned as an extension of the "streetscape" indoors. From the entrance is a walkway between the walls of the atrium and the open lobby, where benches, greenery and fixtures that imitate street lamps were placed.

These elements lead up to an addition that the designers refer to as "Spanish steps".

This structure is pyramidal and works with the changes in elevation of the site to create more sitting and social areas in the atrium. 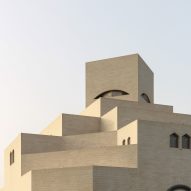 "With IM Pei's death, the last of the modern monument makers has passed"

The steps climb towards a mezzanine that connects the atrium to a covered walkway over Broadway, as well as to the second floor of the building.

On the second floor, MAWD revamped 9,300 square feet (863.9 square metres) for amenities including a gym, yoga studio, and conference rooms.

The purpose of the design, according to MAWD was "to attract leading companies during the area’s tech boom, providing flexible and responsive spaces for the future of work".

The legacy of Chinese-American architect IM Pei, who died in 2019 aged 102, continues to draw interest; the Mesa Lab in nearby Boulder, Colorado, has become a focal point for architectural photographers. His structures that have received updates in recent years include Eskenazi Museum in Bloomington, Indiana, renovated by Ennead Architects.

The photography is by Robert Benson.